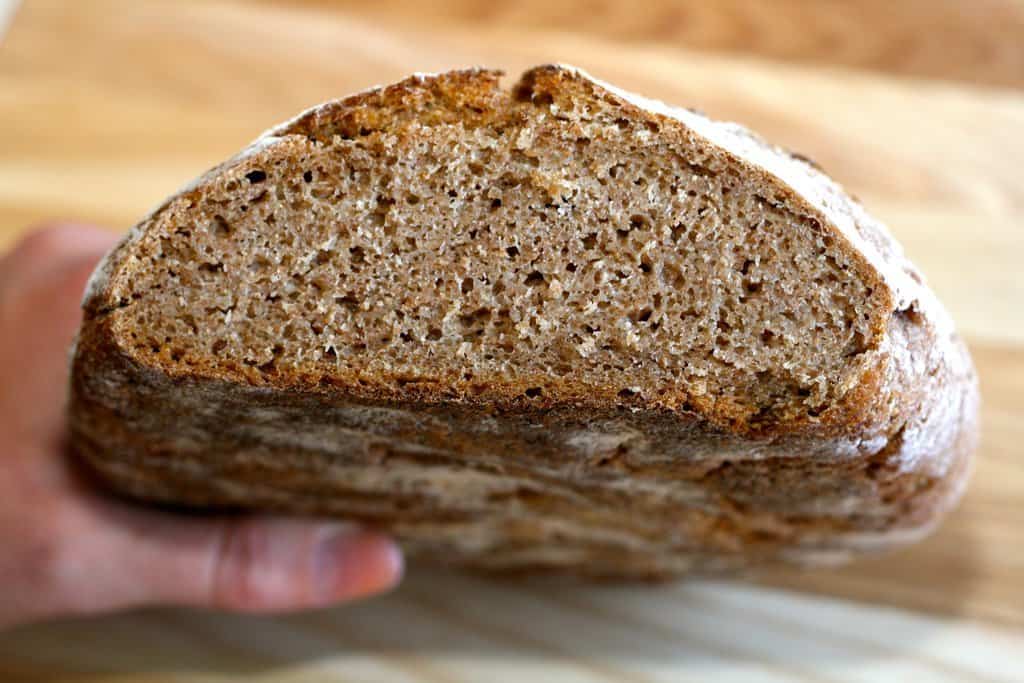 Ezekiel bread is a sprouted whole-grain bread that’s derived from an ancient recipe in the Biblical Book of Ezekiel, where the bread gets its name.

It includes wheat, barley, millet, spelt, and lentils, and some variants include other legumes as well.

This broad range of grains provides a robust source of amino acids and fibers that are great if you are trying to diversify your carbohydrate sources, or if you are a vegan and need to expose yourself to a wide range of different plant-based protein sources.

Our research team has ranked the ten best Ezekiel breads and reviewed the science behind how this type of bread stacks up compared to other types of whole grain bread.

Food for Life Ezekiel 4:9 Bread is by far the most popular and highest-quality Ezekiel bread on the market. Each loaf is super-dense, at 24 ounces each, and the ingredients are completely organic.

That does mean that you need to keep this bread frozen right up until you’re ready to use it, though, since it has no preservatives or pesticides.

20 Shekels makes an Ezekiel bread that comes in a two-pack of round, uncut loaves. It’s about as natural and unprocessed as it gets; this artisanal bread is widely praised for its taste and quality, which places it highly in our rankings.

Though not technically Ezekiel bread, Dave’s Killer Bread sports almost all of the necessary sprouted grains, which gives it an impressive amount of fiber and omega 3 fatty acids.

Despite these advantages, sticklers for low sugar diets will not like the cane sugar used to sweeten this bread, though the total amount of added sugar is still small.

In addition to its flagship Ezekiel Bread, Food for Life makes a high-quality cereal version of the Ezekiel 4:9 grains, except they are toasted and mixed together instead of being baked into a bread loaf.

It has all the same advantages and health benefits of Ezekiel bread, and goes well with healthy non-dairy milks like flax or almond milk.

Columbia County Bread & Granola Sprouted Wheat uses sprouted wheat, salt, yeast, and water to make this bread. While it’s missing the barley and millet it would need to be true Ezekiel bread, the raw simplicity and high quality of this dense 24 ounce loaf outweighs that drawback if your primary priority is purity.

Oasis Flaxseed Bread also misses a few of the key grains that qualify a bread as Ezekiel bread, but it nevertheless has a lot of fiber and protein relative to its caloric content.

Its heavy reliance on flax makes this bread more dense and lower in both glycemic index and total carbohydrate content, making it a great alternative to white bread.

Alvarado Street Bakery Sprouted Multi-Grain comes with several (but not all) of the grains necessary for Ezekiel bread, and ships frozen to preserve its freshness.

It does have honey added for sweetness, but that aside, the ingredients list is pretty solid.

If you’d rather make your own Ezekiel bread to get the freshest possible bread, Handy Pantry has a solution for you.

They sell a kit that includes everything you need to make your own Ezekiel bread at home, though to match artisanal bread exactly, you’ll need a way to grind the grains. It’s a good solution for do-it-yourselfers, but others would be better served by pre-made bread.

It’s still a sprouted spelt flour bread with no preservatives, though some people may not like the fact that this bread includes cane sugar as one of its ingredients—sprouted breads like Ezekiel bread are advantageous precisely because their glycemic index is low, and adding sugar to the ingredients will significantly increase the glycemic index of the bread.

Silver Hills Bakery Squirrelly Sprouted Bread uses several sprouted grains to create an Ezekiel-like bread, though its actual health benefits are hampered by the fact that the second ingredient is sugar. Because of this, it’s not the best choice for a regular, everyday bread.

Who Should Buy Ezekiel Bread?

Ezekiel bread is great for both adults and children as it provides a variety of vitamins and nutrients designed to support a healthy body. Because it’s packed with more fiber, it’s great for individuals eating healthy or trying to lose weight.

Ezekiel bread is great for people on a restrictive diet as well. However, it’s not entirely gluten-free, so celiac patients will need to be careful.

Ezekiel bread is known to be a healthy alternative to bread, but with such a rise in popularity, many copycats have come to the market with a subpar product. When ranking Ezekiel bread, we first looked at the ingredients list. We preferred Ezekiel bread, like Food for Life, that needs to be kept frozen because it indicated that it was free of artificial preservatives.

The taste was another important factor, as long as it didn’t counteract the health benefits of natural Ezekiel. Products that contained excess sugar, like Silver Hills, was ranked lower since it was significantly less healthy.

Handy Pantry made our rankings because they offered a do it yourself Ezekiel bread. This is as close to home-cooked you’d get but is quite an inconvenience since you have to make it yourself.

Dave’s Killer Bread made it high on our list because it combined almost all of the necessary sprouted grains, which gives it an impressive amount of fiber and omega 3 fatty acids. However, it didn’t rank in our top spot since it included cane sugar to improve the taste.

Ezekiel bread benefits and side effects

You may have noticed the Ezekiel Bread selection in the market has been on the rise lately. This dense, nutty, vitamin-rich bread comes with a long list of health claims, mostly based on the incredible variety of grains, seeds, and legumes it contains.

These grains, seeds and legumes have their nutritional value enhanced by allowing them to sprout, which converts some of the carbohydrates present to stimulate growth and increase the concentration of vitamins and protein, and enhance the bioavailability of several minerals.

More and more people are turning away from white, processed-flour breads and towards complex carbohydrates that include energy-dense seeds and grains. For this reason, a sprouted bread like Ezekiel bread is continuing to grow in popularity.

Ezekiel bread is made from sprouted grains and seeds rather than flour. There are many varieties of Ezekiel bread, but the traditional and biblical recipe calls for a few essential components; namely, wheat, barley, millet, spelt, and lentils. On top of these key ingredients, you may also find types of Ezekiel bread that include soybeans and other legumes.

The five essential ingredients are taken directly from the Bible, where it’s stated that Ezekiel was instructed to take those ingredients, store them in a jar, and use the results to make bread (1). He’s believed to have lived on this bread for roughly one year and one month.

The bit about the jar is where we get the idea that Ezekiel Bread is made from sprouted grains and legumes. Essentially, this is a sprouted grain bread.

Sprouted grains are thought to be beneficial because the sprouting process increases the production of many essential vitamins and amino acids in the grains and seeds, making it healthier than the pre-sprouted ingredients.

Sprouting turns carbohydrates in the grains and seeds of Ezekiel bread into more nutrients, fiber, and vitamins.  To understand the benefits of sprouting, first you need to take a look at how traditional flour bread is made.

In traditional bread, wheat kernels are ground up into flour. If it’s whole wheat bread that includes the outer shell and the bran. If it’s white flour, that includes only the endosperm. The endosperm is rich in amino acids and carbs but not fiber (2).

With sprouted grain bread, those wheat kernels are allowed to sprout first. Then they’re ground up and baked into bread.

A sprout is when a grain, a seed, or a legume grows from its “seed” stage into its next stage of development before there are any leaves. It’s not yet a full plant: only a seed whose outer shell has been broken through by tiny new roots.

The reason for allowing the grains to sprout is that during the process of sprouting, some carbohydrates are lost. That means the protein content of the sprout is higher than that of the flour, and that the carbohydrate count is lower.

There are also certain trace  minerals which are released during the sprouting process.

In addition, sprouted grains contain more nutrients and fiber. However, sprouted wheat seems to deliver the highest nutrient benefits, as opposed to millet, barley, and the other ingredients in Ezekiel Bread.

The sprouting process may create better bioavailability of vitamins and minerals. Folates and dietary fiber are also increased via the wheat germination process.

When grains like wheat are sprouted, the body is better able to absorb trace minerals like selenium (4). Further, millet, when sprouted, also may deliver superior bioavailability of iron and calcium (5).

Millet also increases its protein content when it is allowed to sprout (6). Likewise, if red beans (a type of legume) are used in the breadmaking process, sprouting results in an increased level of digestibility (7)

On all counts, however, the increased nutritional value is fairly small.

As a naturally-processed food, there are no major side effects to Ezekiel bread that you would not get in a similarly formulated standard bread.

The biggest concern for most people would be its wheat content: since one of the key ingredients in Ezekiel bread is sprouted wheat, it cannot be gluten-free.

This means that people who are gluten intolerant, or who have celiac disease, can’t enjoy the health benefits of Ezekiel bread.

If you fit into either of these categories, there are plenty of other options for getting high-quality and nutrient dense whole grains in your diet. Barring that, you can always take a fiber supplement to shore up your dietary fiber requirements.

Another disadvantage of Ezekiel bread is that, being derived from seeds and grains, it is not by any measure a low-carb food. While its glycemic index (a measure of its effect on blood sugar) is a lot lower than refined carbohydrates, it’s still fundamentally a carbohydrate-rich food, even if these carbs are released slowly into your body versus quickly.