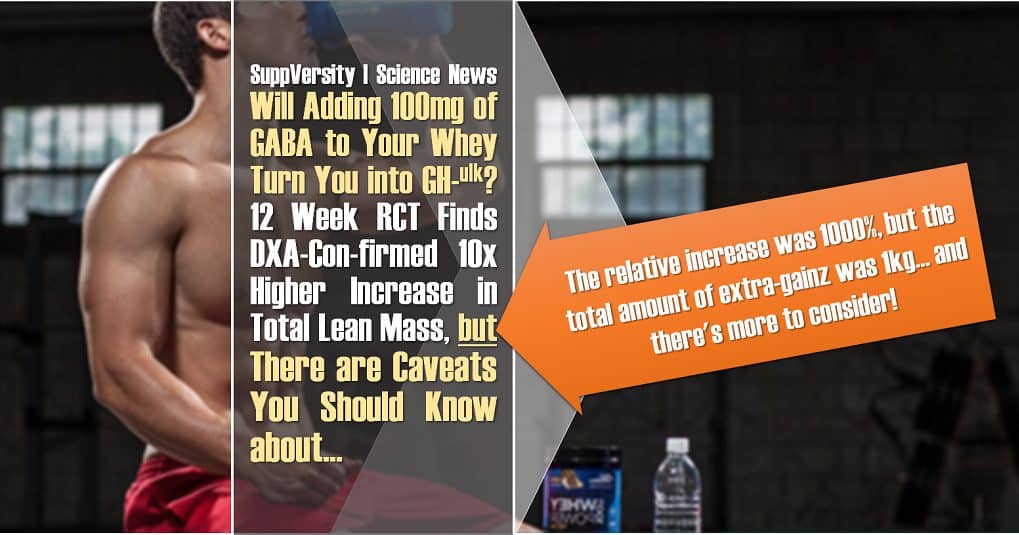 
I’ve previously told you about #GABA, I also highlighted that it’s questionable whether its use as a growth hormone (#GH) booster is actually going to yield visible improvements in your physique… on the other hand, the GH response to workouts was – next to cortisol – the only hormonal correlate West et al. (see Figure 1, in previous article) observed in the best and IMHO only decently well powered long(er)-term study investigating what Stuart Philips called “a hormonal ghost” (Philips 2012), i.e. the contribution of the transient increase in growth hormone, testosterone, IGF1, etc. in the hour/s after a workout.

Now, GABA has been found to trigger similarly transient increases in GH as resistance training. Unlike the effects of straight exogenous human growth hormone (#HGH), the effects of GABA on muscle protein synthesis have not yet been studied in humans… not yet? Yes, this means it has been done.

In their latest paper, scientists from the R&D department of Pharma Foods International report on the results of an experiment in which they examined “the effects of oral GABA plus whey protein supplementation on muscular hypertrophy in men after progressive resistance training” (Sakashita 2019). In that, you guessed it, …

daily for 12 weeks. With regard to the way the supplement was consumed, the scientists write:

“Subjects were instructed to ingest the supplements within 15 min of training, or before sleep on a non-exercise day. Each supplement was dissolved in 150 mL water immediately before ingestion.”

This training program was performed twice per week in a fitness club with training equipment and included one unsupervised and one professional trainer-supervised session per week. All resistance exercises were performed in three sets (12 repetitions; 2 – 3 min rest periods).

[…] Exercise intensity was set at 50% maximal strength for the first week and then raised to 60% after week 1. Weights were progressively increased in 2.5 – 5 kg intervals when the prescribed repetitions could be completed. The trainer ensured that subjects provided maximum effort and intensity for all supervised training sessions. Subjects were instructed to only perform exercises as part of the training program; those who missed three exercise sessions were excluded from the analysis” (ibid.) – whether the non-preregistered study was adequately powered was not reported, by the way … 🤔

The main outcomes were the 12-week increases in maximal strength which were not tested directly, but calculated by dividing weight by percentage of RM, as well as body composition (fat-free mass, fat mass, and total body mass), which was assessed for all subjects using dual-energy X-ray (#DXA) absorptiometry, and plasma GH concentrations, which were measured using a commercially available enzyme-linked immunosorbent assay for human GH.

Neither the training nor the supplements significantly changed either the energy content or the macronutrient composition of the subjects’ diets!

What the combination of resistance training + 10g of whey that was consumed on top of rather marginal protein intakes of 1g/kg body weight per day did, though, was to trigger significant changes in body composition – total lean mass to be precise.

Now, that’s per se not surprising. After all, we’re talking about training noobs, but what is surprising (at least to me) is both the statistical significance as well as the absolute size of the differences in lean mass gains in the “whey only” vs. “whey plus GABA” group, you can see in Figure 1.

Two additional observations are interesting and potentially worth considering: the difference between total extra lean mass gains and arm and leg lean mass gains (Figure 1), and the decline of the GH boosting effects of GABA over time (Figure 3).


In fact, if you scrutinize the data in Figure 3, you will realize that timing is the only relevant inter-group difference – the direct comparison of the increases didn’t yield significant results (even if it may initially look like that).

You may have to cycle GABA to see benefits: Before we draw some final conclusions, though, let me briefly address what I consider to be an important but easily overlooked implication of the study at hand: if it even works, you probably need to cycle GABA, as its effects wear off within 1-2 months and it’s not clear if they return after another 2 months of abstinence… since you’ll by then be no newby, anymore, it’s questionable whether this 2nd ‘cycle’ will yield significant results, at all – even in the less relevant “total lean mass” category. Ah, … and with the age of the study’s participants ranging from the early-20s to the mid-40s, the corresponding “GABA-cycling”-trial should also investigate whether the need for and/or optimal timing of these cycles depends on biological, not just on training age.

What? Ok, let’s rephrase that: (a) both WP + GABA + training and WP only + training lead to statistically significant increases in growth hormone, but (b) it took 8 weeks vs. 4 weeks in the WP only group for these changes to reach statistical significance over the baseline levels in this group – and again (c) an inter-group difference was not observed at any point during the study due to the high variability of the GH levels.

So what do we make of these results, then?  Well, let’s first address the usual confounders: (a) the subjects were untrained, results may differ for a trained population (the amount of lean mass gained, for example, is likely to be smaller), (b) protein nutrition is beyond current recommendations for strength trainees (up to 3g/kg | ISSN), hence different overall gains and inter-group differences may be expected from studies in populations with higher protein intakes.

Now for the exciting question: Does this study show that daily GABA supplementation helps to enhance exercise-induced muscle hypertrophy? The answer is more straight forward than you’d expect: No, it doesn’t!

The study demonstrates that there are beneficial effects in terms of total lean mass. Since the latter includes organ mass and the subjects’ “organ-free” arms and legs didn’t grow faster, the scientists are right to limit their conclusion to “daily GABA supplementation may help enhance exercise-induced muscle hypertrophy” (my emphasis in Sakashita 2019).

Disappointed? Well, the mere fact that the Japanese scientists observed a difference in hypertrophy-related outcomes in response to the co-supplementation with GABA, at all, is newsworthy, IMHO. We do yet have to avoid to be carried away by impressive relative increases of only semi-relevant study outcomes. After all, anything that goes beyond the conclusions that there’s some interaction with total lean body mass (but not the typical hypertrophy targets of resistance training: arms and legs) going on would be a misinterpretation (see red Box on cycling) for another caveat). To go beyond these two fundamental statements is speculation…

As the authors highlight GABA could “enhance muscle hypertrophy [due] to its ability to increase basal GH concentrations”; and, at first, the data seems to support that… “at first”, i.e. until you realize that significant inter-group differences in the GH levels between the WP and the WP + GABA group were not detected at any time-point of the study.

Accordingly, it makes sense look further to potential “gain mediators” that were not measured in the study at hand… which ones? Well, what about improvements in sleep quality and fatigue reduction as they have been previously reported by Yamatsu et al. (2016) three years ago? As the authors of the study at hand readily themselves admit, we’d have to do a second study to investigate potential effects on sleep, HRV, subjective stress, and training motivation, which could all be affected by GABA supplementation. Moreover, studies in trained individuals and with more appropriate protein intakes (>2g/d vs. ~1g/day) are warranted and the scientists should make sure that the 1kg increase in lean mass is not a consequence of increased glycogen storage (learn why), which could be a side effect of the interactions between GABA and glucose metabolism (Gomez 1999; Wan 2015) and or endocrine functions other than growth hormone (Erdö 1990; Gladkevich 2006; )… so, in essence: little do we know, but we are intrigued, right? Don’t worry, I will keep you posted here and in the SuppVersity Facebook News at www.facebook.com/SuppVersity | Comment!