If there’s one thing I’ve learned throughout life, it’s that initial impressions of a person are more often than not, completely wrong. That’s why when preparing to interview Jason Osei I steeled myself to talk to a man who is obsessed with performance, physique and physical fitness. Don’t get me wrong, he does make a habit of sticking to his fitness routine and has based his career around using his body as his tool, but underneath that imposing physique is a giant teddy bear of a guy with a head on his shoulders that’s stronger than his statuesque form. 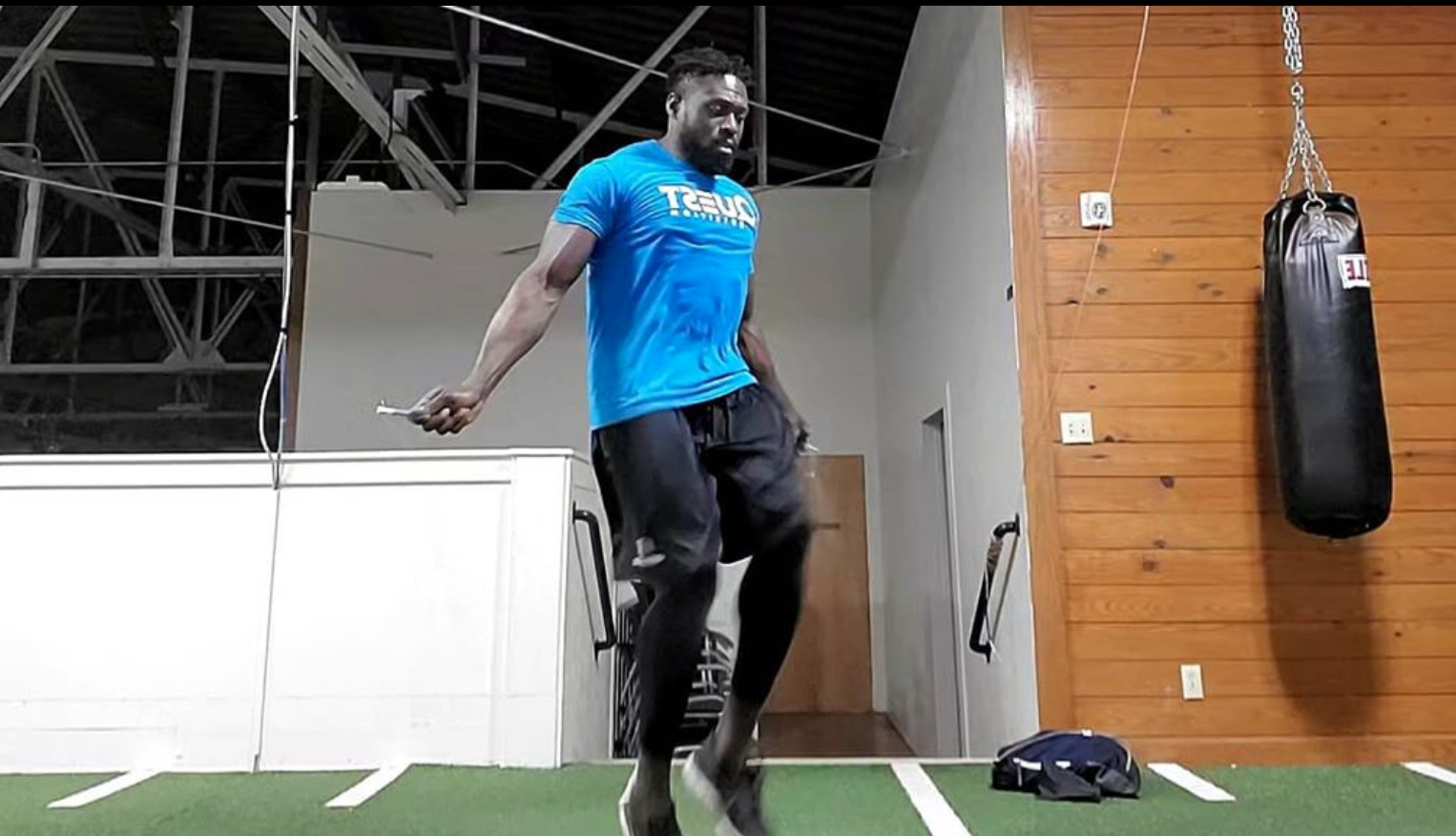 Jason is a martial artist, semi-professional wrester, and a former college football offensive lineman who lives in Texas by way of London, England. Not exactly the type of person you conjure up when you think of a person with a penchant for Starburst and sweets, but that’s just the beginning of the surprising duality of the man.

In my continuing series of featured Quest Squad members, I’m excited to introduce you to Jason and share some of his insights on training, knowing your limits, and how to stay engaged during a worldwide pandemic.

“I love sweets, if you put a bag of Starburst in front of me, I won’t stop until that bag is gone.”

When did you begin your fitness lifestyle? 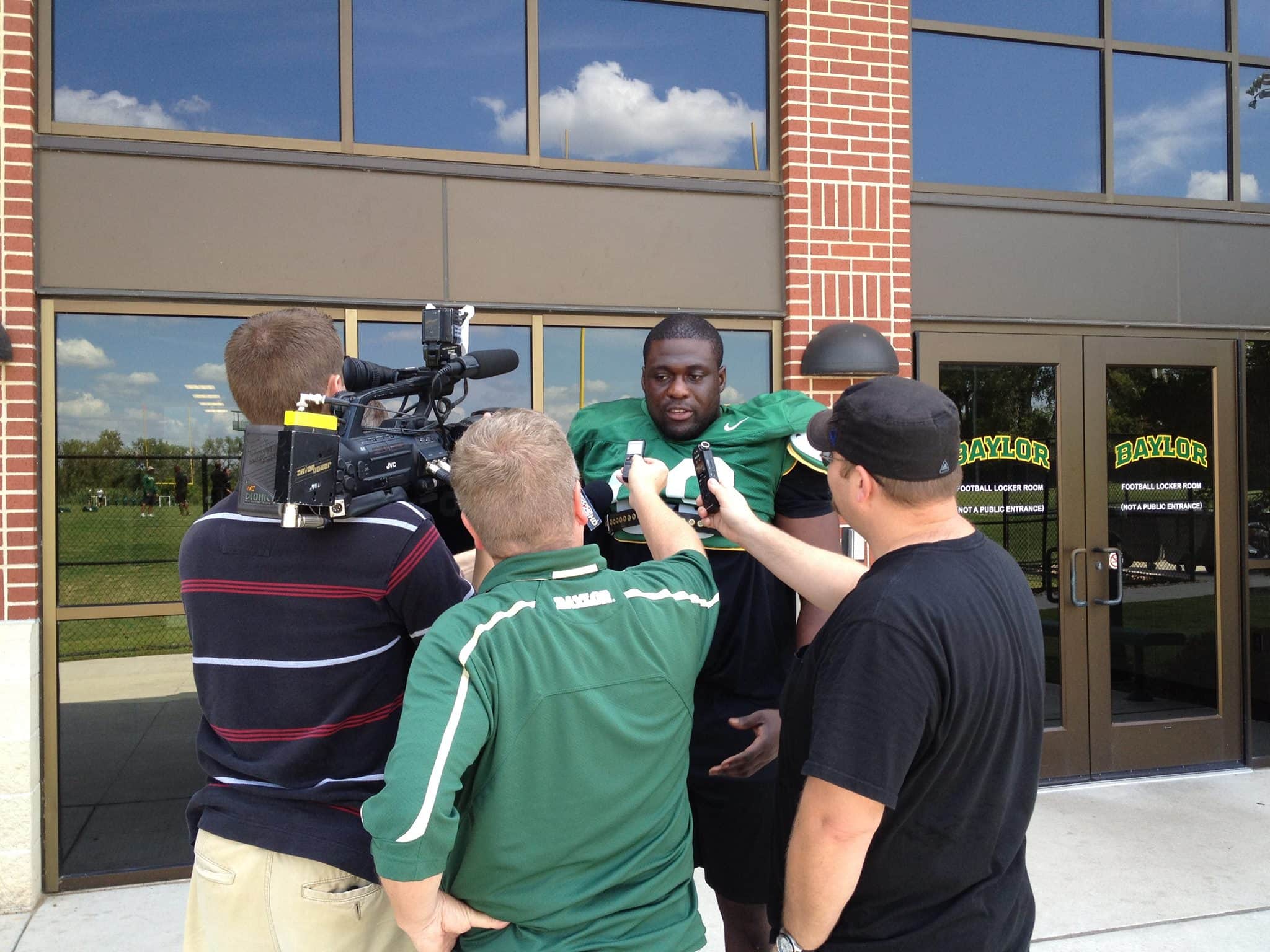 Jason: It’s been a journey I’ll say that. When I was a kid in London I played basketball and soccer, but I was a chubbier kid growing up. I had a cousin who is a martial artist, he’s currently a Bellator MMA fighter, who got me on the path I am on now. It’s an unusual path because I trained in martial arts but ended up playing football — American football — for some teams in England, then I played in Helsinki and I eventually sent out to American colleges to play football in the States. I ended up getting accepted to Baylor to play offensive line because I was a big fella but shrank dramatically to get to where I am now. Playing football I transferred to Texas A&M Commerce. I went to pro day and was seen by some scouts, but nothing really came from it. I was 340 pounds at that point and thought ‘I need to lose some weight’ if I’m not playing football. It was unproductive and was hurting my joints and stuff so I began cleaning up my diet, doing weight training like compound explosive weights like we did in football training, and that helped me begin to lose weight.

I connected with a friend and got back into martial arts and fitness and they connected me with the school I’m at now, helping out one of their heavyweight fighters. I was asked if I wanted to do more fights and accepted, so I had to get ready for camp and that’s what began my MMA journey.

“I adhere to the Japanese philosophy of “your body is your weapon” in all regards of my life, so I want to treat my body right so it’s ready at all times.”

What’s the difference in training for MMA and martial arts as opposed to something like football?

Jason: It’s definitely different than general fitness – you have to make sure everything is geared toward staying fit, but also factor in performance. I started eating lots of greens and cutting out sugar, which is where I got into Quest Bars. Because I love sweets, I needed something that gave me that same taste and sensation. If you put a bag of Starburst in front of me, I won’t stop until that bag is gone. And when I started my transformation, I would work out hard and could only drop 10 pounds. I kept thinking to myself, why is that? So I went cold turkey on the candy and in the next month I dropped 30 pounds. I know that’s not for everyone and people need to keep those sweets in their rotation, but for me it was the only way. That’s why I love the Quest Hero Bars. I stumbled upon thm at Walgreens one day and tried them and thought ‘these are absolutely amazing.’ Ever since then I make sure I’ve got them on hand for my sweet tooth.

How did wrestling come into play, was that a natural progression from MMA and martial arts?

Pretty much, I was basically getting ready for fight camp and got to try out with the WWE, I flew to Orlando and tried out with them and I’m still on their watchlist for their UK brand, so I’ve been working with coaches and training for that.

“I know it’s tough for everybody right now with Covid, but it’s taught me to put ego behind reality. My ego will tell me that I can control every situation in life, reality teaches me I cannot, so I just adapt to the situation.”

How has Covid-19 affected your aspirations since MMA and wrestling are highly spectacle sports that require fans to pack into arenas?

With the Covid thing, everything is so uncertain but I’m basically taking no time off from training, because when everything is able to open back up again, I want to be able to perform when the time comes. I adhere to the Japanese philosophy of “your body is your weapon” in all regards of my life, so I want to treat my body right so it’s ready at all times.

I know it’s tough for everybody right now with Covid, but it’s taught me to put ego behind reality. My ego will tell me that I can control every situation in life, reality teaches me I cannot, so I just adapt to the situation. It’s a different kind of life to live, yeah, we’re all isolated, but that doesn’t mean you can’t still workout. I can socially distance run, I can workout at home, do pushups, work on my diet. It’s the philosophy of ‘control what you can control.’ So when I get back at the end of the day, I may be rusty on my technique, but if I’m keeping my cardio and weight in check, I can concentrate on the parts where I’m lacking when we return to normal life. It’s having that outlook and perspective that are going to help me and everyone else get through. 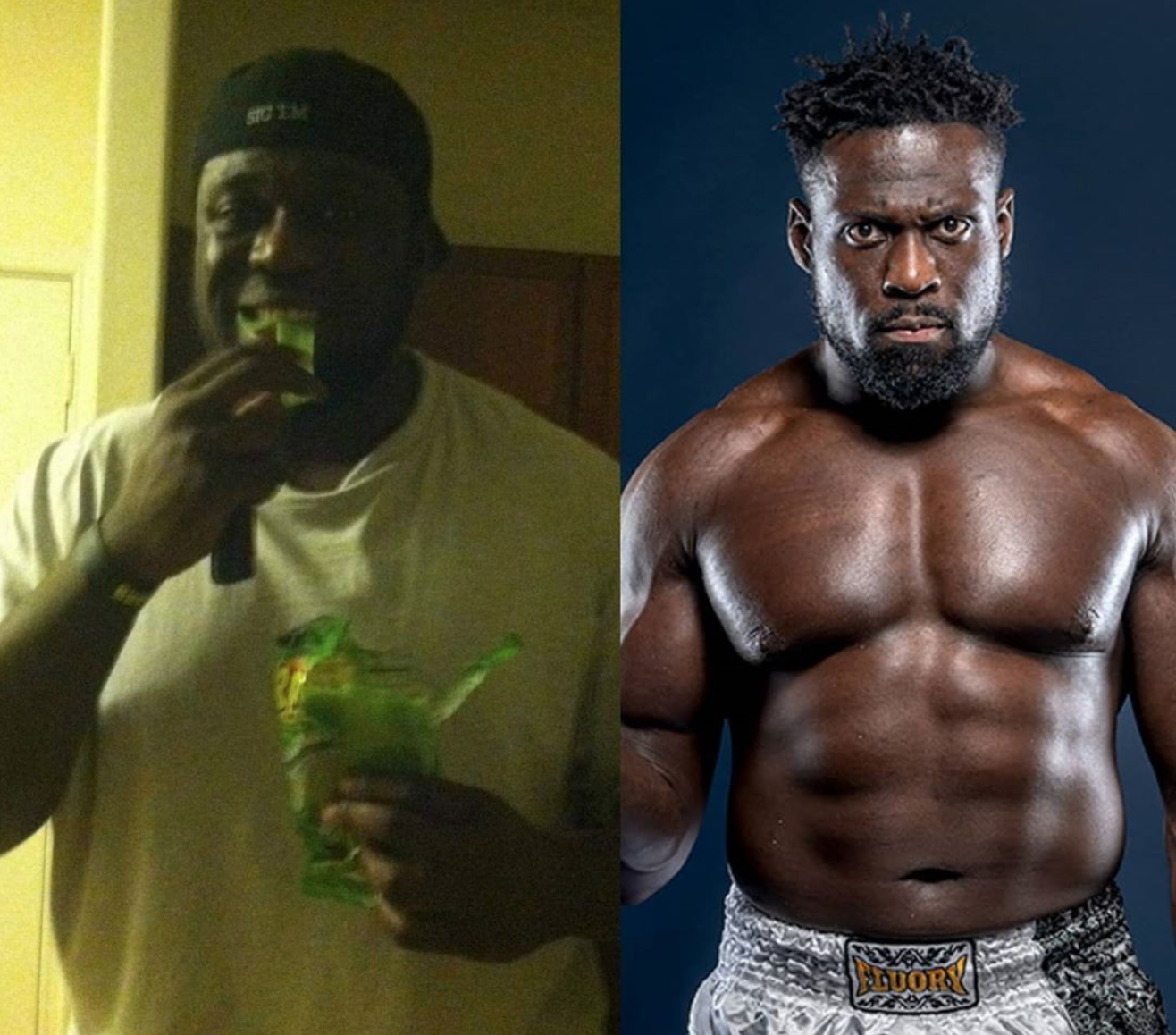 Being involved in so many high risk, high injury fields, how do you ensure you’re taking care of yourself properly?

Jason: I think, and everyone has their different opinions on sports and how it’s handled in general. There will be people who disagree. You have to take care of your tool and how it works. You have to understand that you’re not going to be doing this forever. You have to do this with that in mind. When I have, kids I want to be able to live a normal life after this is all done, I’m not going to be 45-50 years old competing at this level. Father time catches up to all of us, a lot of people in sports don’t realize that. The older you get the more susceptible to [injury] you become. You lose resiliency, it happens over time, you can mitigate that over time by doing things like yoga.

When we train and spar for our sports we go through days and nights where we have to taper it down. Like, before a fight we’re not going to go all out and destroy each other. Think of it like a video game, you have a stamina bar, you want to go in with a 100% stamina bar. If you’re beaten up and tired going 100% all of the time, you’re not going to perform.

That’s how it is in real life. It’s full circle, the things you’re eating, the nutrition, how you work out, it’s all about balance.

Look at Mick Foley: You can respect his decision to do it his way, and it worked for him, but now he’s paying for it later on in life. A lot of people need to realize you don’t have to be like him to make it. Treat practice as practice. You’re trying to gain the skills that are going to help you come performance time. Work hard and train hard, yeah, but you’ve gotta leave something in the tank so you don’t risk injuries and harm your body.

I’ve spoken to a lot of athletes and MMA fighters working for Quest and you’re the first person I’ve heard with that perspective. What does that mean for you in the future and how you plan on training and continuing on this journey?

My fitness journey is going to follow me through life, when I’m 60-70 I’ll still be active. I think people in my field have to understand that you want to go out on your terms and when you do that, you won’t feel like you left anything on the table.

Learning that there will be a time to step away is pivotal to leading a fulfilled life. It’s not quitting, it’s saying ok, cool, this is enough, what else do I want to do and go into that with the same intensity. 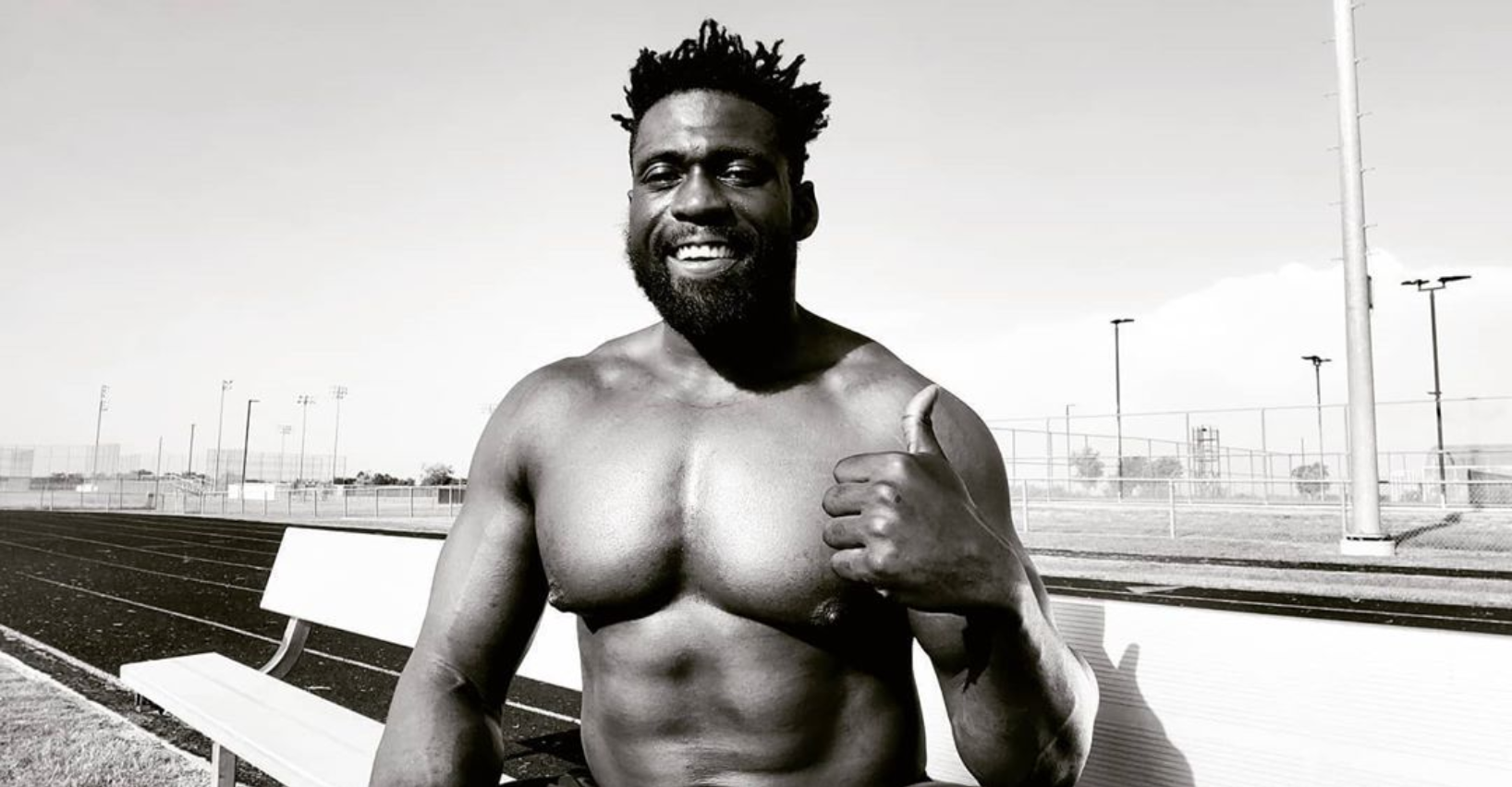 “I’m a big advocate for the Quest products, I don’t think I’ve tried many protein products that I legit had an attachment to.”

Wrapping things up, speak a little bit to your experience with Quest Squad – why you joined and what you enjoy about it.

I saw a commercial for it to join up and I was like, I eat these things all the time, why not? Of course I’m going to join the Quest Squad. And I love the missions, with wresting you get to perform a lot so I like that it’s kind of goofy and you can have fun with them. I didn’t realize how involved these missions are and how Quest is legit in sending us so many products. I feel so spoiled right now. The missions are pretty fun, I’ve done almost all of them except one or two because I was traveling. I also got two of my buddies to join the Quest Squad.

It’s funny because people know me from my social media and doing fitness, but I’m really lighthearted. I’m a ‘don’t take anything too seriously’ kind of a guy. I feel like life is way too short to take I seriously, that’s why the missions are up my alley. I don’t mind going somewhere taking a picture with a Quest bar, and yeah, people see a big guy holding this bar, and I’m sure I look really silly, but it gets you to come out of your comfort zone and teaches you to be more extroverted. I’m a big advocate for the Quest products, I don’t think I’ve tried many protein products that I legit had an attachment to.

The way the Quest Squad keeps us engaged, I feel like I have a friend. Some protein companies you see these guys and girls and they’re all rocked up and it looks inaccessible, but with Quest, it’s for people who maybe workout 2-3 times a week and that’s okay. It’s for everybody and that’s a really cool thing you don’t see with other brands.