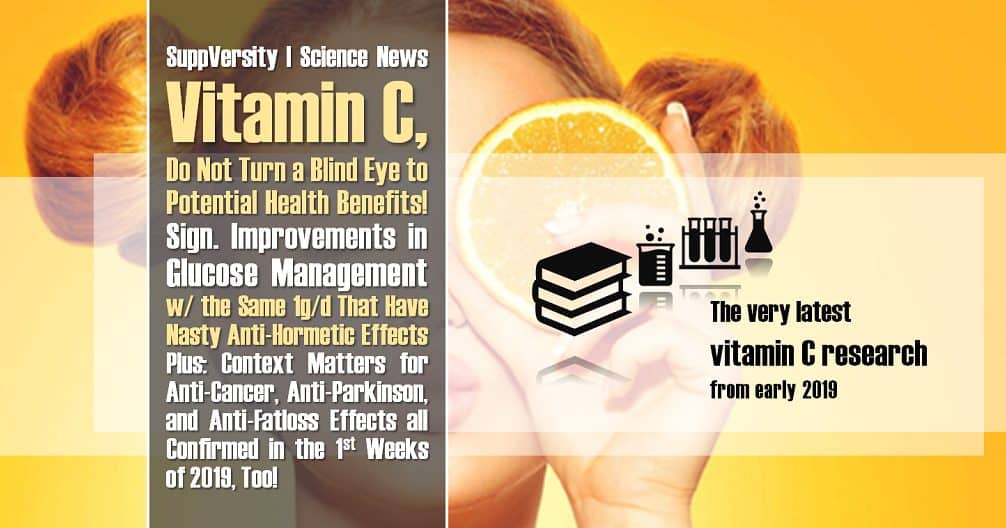 A couple of years ago, the #1 discussions about vitamin C one could have would usually address the following questions: “Does vitamin C prevent/treat the common cold?” and… (I still get this question, by the way) “Is ascorbic acid/manmade vitamin C bad for your health?” Don’t worry, neither of these questions is going to be re-addressed in this short C-special (for the latter question, I suggest you re-read my article about ‘natural’ vs. ‘synthetic’ vitamins, here.
What I cannot spare you, though, is the question of anti-hormetic effects, which is contemporarily the most heavily-debated C-question. Basically, the theory of (mito-)hormesis says that some ‘stress’ (in the form of radical oxygen specimen | ROS) is necessary for our mitochondria to work properly, to adapt, and renew. Accordingly, it’s not really surprising that bad things will happen if you drown all ROS in vitamin C (+E)… bad things, of which the worst (for the bros, at least) may actually be that ascorbic acid blunts the adaptational response to exercise. Yeah, thAt’s bad news!

What’s actually worse, though, is that the C+E combo has also been shown to mess with the exercise-induced improvements in glucose management in people for whom their life, not their athletic career and/or their personal vanity are at stake. It does, therefore, make perfect sense to think twice about the potential side effects and benefits of supplemental vitamin C. I mean, as pointed out in a previous article, vitamin C can also help improve/restore the very same glucose handling it appears to mess with when it blunts the exercise-induced ROS increase.

Starting with a very recent study (Feb 2019) about ascorbic acid’s beneficial effects on sedentary T2DM patients, this article is going to give you an overview of selected studies from 2019 (seasoned with older studies as references) to bring you up to speed with everything that’s new and interesting in the world of vitamin C research, including its use(fullness) in battling Parkinson’s, its Janus-faced role in our battle against cancer, its liver-protective effects in people on antibiotics, its association with reduced risks of chronic respiratory disease, and – obviously – the latest revelations about its anti-gains + anti.-fatloss effects in exercising young women… and the answer to the question “What is worse, vitamin C or vitamin E?”

Ok, is it vitamin C or vitamin E that’s the problem? The simple answer to this question is both! In fact, Egyptian scientists (Ali 2018) have proven only recently that chronic (8 months) supplementation of high doses of both ROS-scavengers will lead to (a) the “disrupt[ion of] glucose tolerance by attenuating upstream hepatic insulin action through impairing the phosphorylation and activation of insulin receptor and its subsequent substrates” for high-dose vitamin C and (b) “effect downstream insulin receptor in the insulin signaling pathway, reducing hepatic glucose transporter-2 (GLUT2) and phosphorylated protein kinase (p-Akt)” for high-dose vitamin E, respectively. As the scientists from the Pharos University in Egypt point out, [o]verall, these findings indicate that the conventional view that vitamins promote health benefits and delay chronic illnesses and aging should be modified or applied with caution” (Ali 2018).

Putting things into perspective: Aside from T2DM as in the Mason study or other chronic diseases, baseline inflammation, age, vitamin C status (and how the latter changes over the supplementation period), weight/body fat, amount and intensity of exercise, etc. … etc.  are all important co-variables you have to consider if you want to decide if you should or shouldn’t take high dose ascorbic acid supplements.

What can be said generally, though, is that the (comparatively) small quantities from foods, are simply too low to have anything but positive effects – whether and to which extent that’s also related to co-factors has been addressed in this previous article about “natural vs. synthetic vitamins” (read it).

It’s also worth mentioning in this context that it seems that not all antioxidants are created equal(ly harmful): While classic ROS scavengers like vitamin C + E or NAC have an ever-increasing number of studies to back up their anti-hormetic effects, the results of studies w/ catechins (e.g. EGCG), astaxanthin, quercetin, glutathione, anthocyanin, or curcumin are mixed, many show benefits even for athletes.

Especially if they’re consumed in form of food, these “antioxidants” (some, like EGCG, act through pro-oxidative effects that can be a problem when you overdose) will augment, not inhibit the exercise-induced improvements in glucose management researchers report in a late 2018 article in untrained male subjects (Takami 2018).

In the corresponding RCT by Takami et al., the natural (directly from foods) antioxidant cocktail augmented the beneficial effects of cycle training at 60% maximum oxygen consumption for 30 min (3 days per week for 4 weeks) on glucose control in untrained men significantly. What I consider important to note, though, is that there was no significant difference in vitamin C + E intake between the vitamin and control group (see Figure 3).

With Takami’s study being only the latest in a long line of studies, it should be clear that there’s still a lot of research to be done on who, when, and why people benefit from which types, forms, and sources of antioxidants, as well as the amount and duration that are required for corresponding pills and powders to put you at risk of reducing your ‘stress levels’ to anti-hormetically low levels of ROS (Pesta & Roden 2017) | Comment on Facebook!