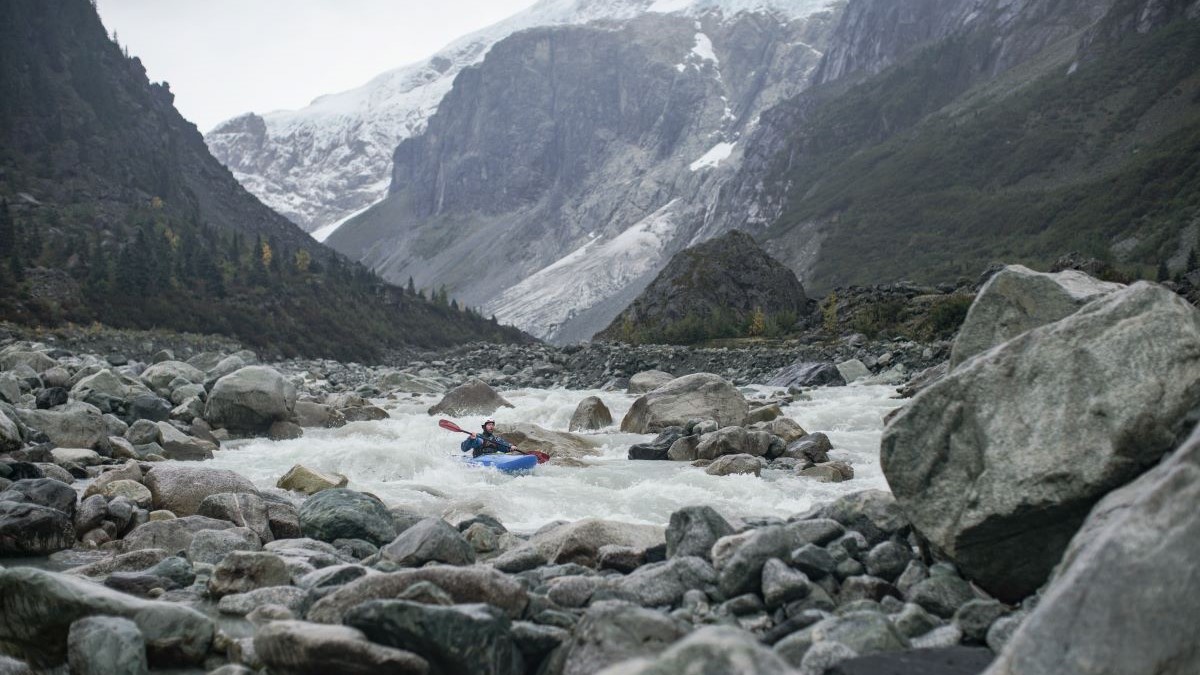 For Chris Korbulic, one of the world’s leading expedition whitewater kayakers, the first descent of the Noeick River in coastal British Columbia started as just a random find on Google Earth.

Upon more research, the river proved to be a welcome new project for Korbulic, with notoriously hard-to-predict flows fed by the War Drum and Fyles Glaciers. He spent months in 2019 imagining scenarios as he planned the trip, which — with little to no visual or online data about possible flows — was a challenge. Eventually, Korbulic’s girlfriend convinced him to just go to the river and scope it out.

That led to the first of a few incidents that might have deterred someone not well acquainted with the hardships that often come hand in hand with kayaking expeditions of the Noeick’s caliber.

Fearful about encountering more bears, Korbulic’s girlfriend decided to turn back. Korbulic, however, was resolute to see the river he had dreamed about for nearly a year.

Two months later, despite a strong storm and pounding rain, Korbulic and his three kayaking partners waited as their weather window teased. They had decided to fly into the headwater’s lake instead of hiking, and — optimistic about a clearing forecast — they called the pilot. It was time.

The torrential rain was still coming down in sheets, and when the plane finally came to a stop, Korbulic asked the pilot if the flying conditions had been serious. The pilot offered no comfort and simply confirmed that yes, the flying conditions had been serious. Korbulic wondered what that serious weather would mean for their journey on the river.

But they made it, and Korbulic saw that the headwaters of the Noeick were as magical as he had imagined all those months. Flooding caused by the rain, however, had all their plans entirely in question. The waters were much bigger than expected but not impassable.

An Infection and inReach® Device

On day four of the trip, in the middle of a multiday portage around a dangerous gorge where a glacier covered the river before a series of intense waterfalls, Korbulic’s companion began to feel a slight pain in his hand, near the thumb joint.

“At camp that night, the group took note of his hand starting to swell significantly and decided he should rest a day while we carried boats and gear to finish the portage,” Korbulic said.

Korbulic’s companion had sustained no injury during the trip and was otherwise in good health, so the pain and swelling were a mystery. The group could only surmise that it was a lingering infection from a recent kayaking trip in Colombia.

In hopes of continuing the trip with the full group, they waited yet another day at camp to see how his hand would respond to rest.

It didn’t. With time, the infection only got much worse, and they were in a remote portion of coastal British Columbia — without cellphone reception and certainly not near civilization. Korbulic’s partner could barely pull on his drysuit, much less hold a paddle. His fingers, hand and wrist were swollen so immensely that they were nearly immovable.

“After continued and worsening pain and swelling, it was clear he would need to get out and seek medical attention,” Korbulic said.

Using the two-way satellite communication on their inReach devices, Korbulic and his partners began seeking medical advice from contacts back home. They concluded that the best option would be for Korbulic’s companion to self-evacuate. Using the inReach devices, they arranged for a pickup at the nearest road.

“We had hiked to this camp previously, before the river trip to leave a food cache, so he knew the route and could easily cover it in a day,” Korbulic said.

Korbulic’s companion used his inReach device to communicate and navigate the route they had previously traveled. He ultimately made it to the hospital and started a course to recovery. It would take nearly 2 weeks to clear the infection, but due to the quick thinking and use of inReach, the team avoided a true medical emergency.

After a bear encounter, a stormy plane ride, a dangerous hand infection and changes of plans, Korbulic reflects on the trip as otherwise “too easy.”

There was very little gray area decision-making while on the river, the rapids were navigable, and the portages didn’t present substantial technical challenges. Despite the early storm and flooding, they had found the perfect weather window and completed the trip downstream and into the ocean in 5 days.

Thanks to years of experience, months of planning, a little bit of lucky weather and the inReach devices for the near-emergency, the first descent of the Noeick was all that Korbulic and his partners could have hoped for.

But for Korbulic, every river experience — even when it’s too easy — is unusual in its own right, and that’s what inspires him to continue the search for the next first descent.