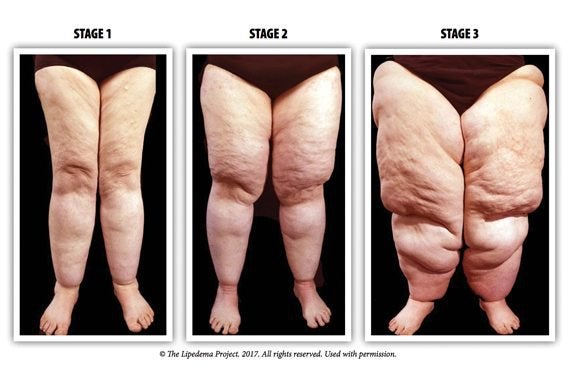 Hey folks, my diet break lasted a fair bit longer than expected. I ended up pursuing a lipoedema diagnosis after a friend suggested it in response to exacerbated pain and bruising. I was diagnosed last week, and I think more people should be familiar with it on this sub.

Lipoedema is a chronic condition whereby fat cells abnormally build up in the hips, buttocks, legs and occasionally arms of women (and, far more rarely, men), resulting in often painful pockets of fat that do not go away with exercise or dietary changes.

You may bruise easily on your legs, find that they’re tender to any pressure (especially the anterior thighs) and have a texture easily mistaken for cellulite. I’m stage 2, which means my lipoedemic fat has migrated down to my ankles, but my legs otherwise look very normal. I just look like a pear-shaped overweight person. I insisted to my loved ones that I needed to pursue a diagnosis (based on the pain, tenderness and bruising) even though my proportions aren’t that bad. Had it confirmed with an ultrasound that I’m covered in the diseased fat. It’s in my arms too.

It’s estimated to affect 1 in 10 women, but it’s not very well known by doctors or the public because it’s commonly mistaken for obesity. This can be really damaging for the lipoedema sufferer because no amount of diet and exercise will get rid of the diseased fat, yet they continue to think they’re doing something wrong.

I think based on how common it’s expected to be, it’s worth knowing about and spreading awareness in case anyone on this sub just can’t shift the weight on their lower body. I hope it’s okay that I’m making this post.

As for me, I may have lipoedema but I’m still a bit overweight on my top half. Going to do my best to lose whatever I can and adjust my goal weight significantly to just the top end of healthy BMI. I can only remove the leg fat with liposuction but I’d rather have solid good habits first.