All ship to UK

The Wildhorse 6 is maximally cushioned

Pros and cons according to our running expert

The WildHorse 6 is a well cushioned daily trail shoe that has a nice bouncy feel. The shoe is well suited for longer moderately paced runs. A lack of stability and increased weight makes this more of a draft horse versus a thoroughbred limiting it moderate rolling terrain versus more wilder unkept technical trails.

The WildHorse 6 returns with the first massive overhaul the shoe has had since its launch. Visually the shoe takes on a much wilder appearance with a vivid color way, voluminous heel, and integrated gaiter.

The biggest stride forward that the WildHorse has taken is a change from Phylon to a full leingth React foam midsole. Other changes include a segmented rock plate and an outsole with fewer but larger lugs.

The biggest questions is does the overhaul leave you charging confidently out of the gates or stuck out home in the barn.

The Wildhorse 6 is a perfect mix of… Read more responsive and plush: good shock absorption

The Wildhorse 6 is maximally cushioned

The Wildhorse 6 is not stable: not indicated… Read more for runners that need support 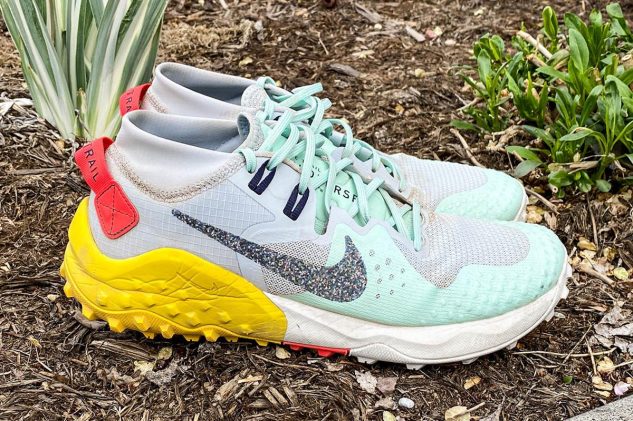 Unboxing the shoe for the first time I was visually taken aback, much like with the Hierro 5, and made me wonder if should be wearing them to an Easter service versus destroying them on a dirty tail.

Being someone that typically gravitates toward earth tones I wasn’t super sure of the color but over time it has grown on me.

Aesthetics aside once I put the shoe on I was initially pleased with the the fit as they felt true to size and snug but not overly narrow especially in the forefoot which historically has been a trend with Nike.

My initial outings in the shoe were great the React midsole had a nice bounce and the added 2mm stack height gave the shoe a nice cushion.

However once I jumped onto more technical steeper terrain my trusty steed changed into a bucking bronco. 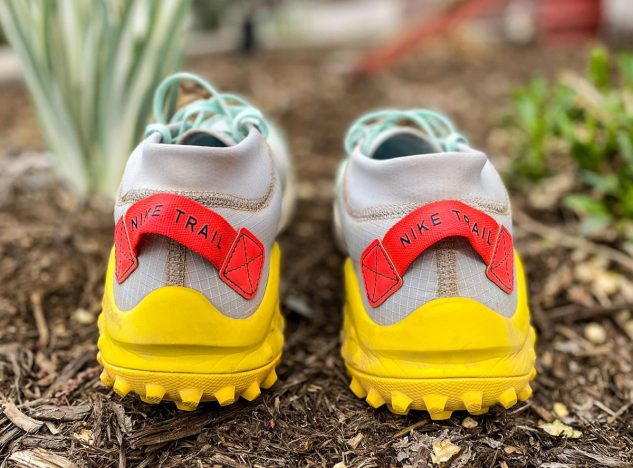 First off I want to address the elephant in the room, at least for me, which is the big yellow saddle of foam in the heel.

Initially I thought that this was a similar design to the JPAD found in the Salomon Sense 3. While this built up heel offers a lot more cushioning it really does very little to reduce shock or fatigue.

Despite Nike’s claims to keep your foot centered on the platform I really didn’t feel any ‘cradle type’ hold like the Sense 3 or bigger Hoka shoes produce.

My experience was just more rubber that wrapped my heel and added weight.

The WildHorse again features a rock plate but is segmented similar to the Keiger 5. The plate covers the upper 1/3 of the forefoot leaving a 1.5 inch gap at the rear from forefoot to midfoot.

This gap in protection is where I seemed to find every jagged rock on the trails, which led to quite a few stinging landings.

I don’t exactly know why Nike made this design choice but if your going to slam a bunch of extra rubber into the heel why not do the the same with the rock plate as weight savings seems to not be a concern.

I will say the plate that is in place has been good with reliable protection. The 6 also has a really generous toe bumper , similar to the 5, that saved my toes without being overly stiff. 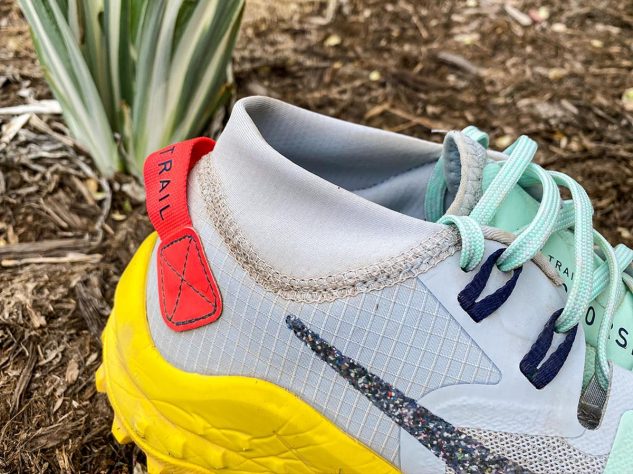 While the color-way of the upper offers a soft gentle tone its use of materials is anything but.

The majority of the upper is tightly woven breathable mesh that transitions to a thicker built up material around the heel.

A series of generous and well placed welded overlays and the rip stop material leaves really no question about the durability of the upper.

The outsole Uses a Anti-clog rubber with sticky rubber pad in the middle. This rubber is ok in terms of performance, but its durability leaves a little to question.

I have so far put about 40 miles on the shoe over a variety of terrain, and am already seeing signs of wear on several of the forefoot lugs. 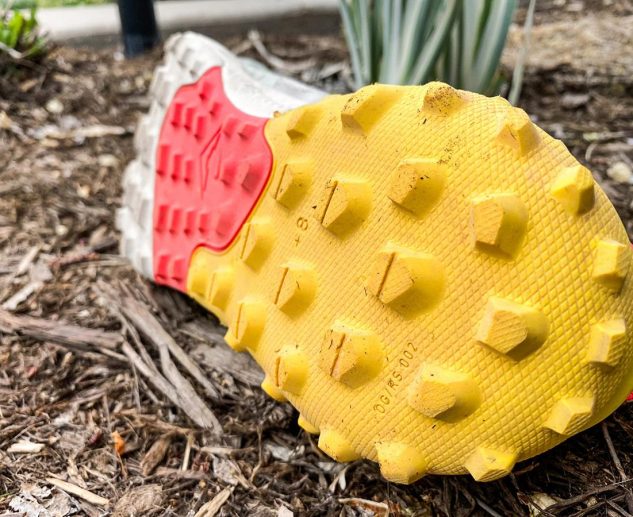 Being the most cushioned shoe of the three in the Nike trail family makes the WildHorse more of a Clydesdale than a thoroughbred.

The react midsole does make the ride more lively than before, but I found that I was working harder than the shoe to go faster even on flat packed trail.

This is where the big yellow saddle rears its big ugly head again as it has a negative affect on stability and responsiveness.

Since I have started running in this shoe I have rolled my ankles more than any shoe I can think of.

I feel that the rounded sides of this heel coupled with the lack of a wider platform has created an imbalance.

On technical terrain the shoe is very unstable which causes me to really slow my pace and become very cautious and considerate of foot placement.

I also found it a bit shifty on steep descents but after playing around with some lacing I remedied this problem somewhat.

The outsole overhaul has reduced the overall number of lugs creating a bigger and deeper lug across the length of the shoe with the all to familiar waffle design.

As I mentioned before an abrasion resistant anti-clog rubber with a sticky rubber pad in the middle is used.

I found the traction to be ok on dirt and dry rocks but not as great in wet conditions like a Vibraml mega grip.

I haven’t put the shoe through any serious heavy clay mud to check out the anti clog claims, but so far this outsole seems to be holding true to it. 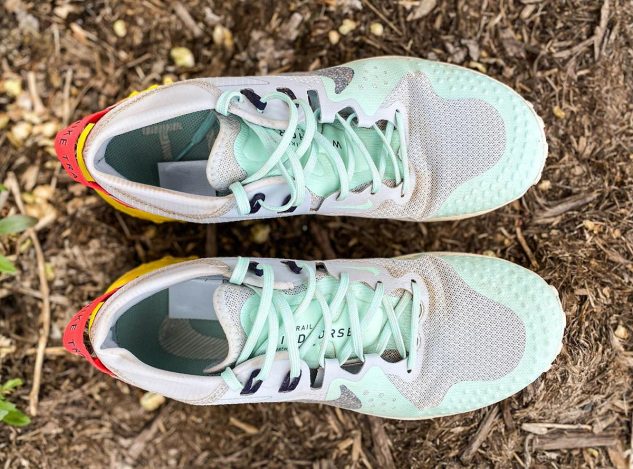 The WildHorse fit me true to size. I found that the toe box comfortable and not overly narrow with a lower ceiling.

I will say that I do have a narrower foot and so this does not mean those with a wider foot Won’t succumb to the narrow Nike forefoot.

The remaining fit of the upper is comfortable and supportive with acceptable lock down and breathability.

Initially I skeptical about the integrated gaiter thinking it would allow for heel slippage. In reality it is really effective.

A built up lip inside the heel collar limits slip allowing the gaiter to keep out debris without limiting ankle flex.

The design of the tongue is also a noteworthy change in the shoe. It is thin with a supporting overlay that keeps it centered, and a just right amount of segmented padding.

This design allowed me to really crank down on the laces, i.e. steep descents, without experiencing any lace bite, and in case you were wondering the lat and long printed on it takes you to WildHorse Lake outside of Frenchglen Oregon.

The updates to the upper and midsole are great and a long time coming for the WildHorse. However, the instability of the midsole makes this a hard shoe to love.

This instability really limits the shoes ability to get into technical terrain making it a tough sell to the hardcore trail enthusiast.

I do feel that the WildHorse is a solid trail shoe with a nice bouncy cushion well suited for runners that enjoy a long, moderately paced run, over gentle rolling moderate trails.

All ship to UK

This page contains affiliate links. As an Amazon Associate I earn from qualifying purchases.