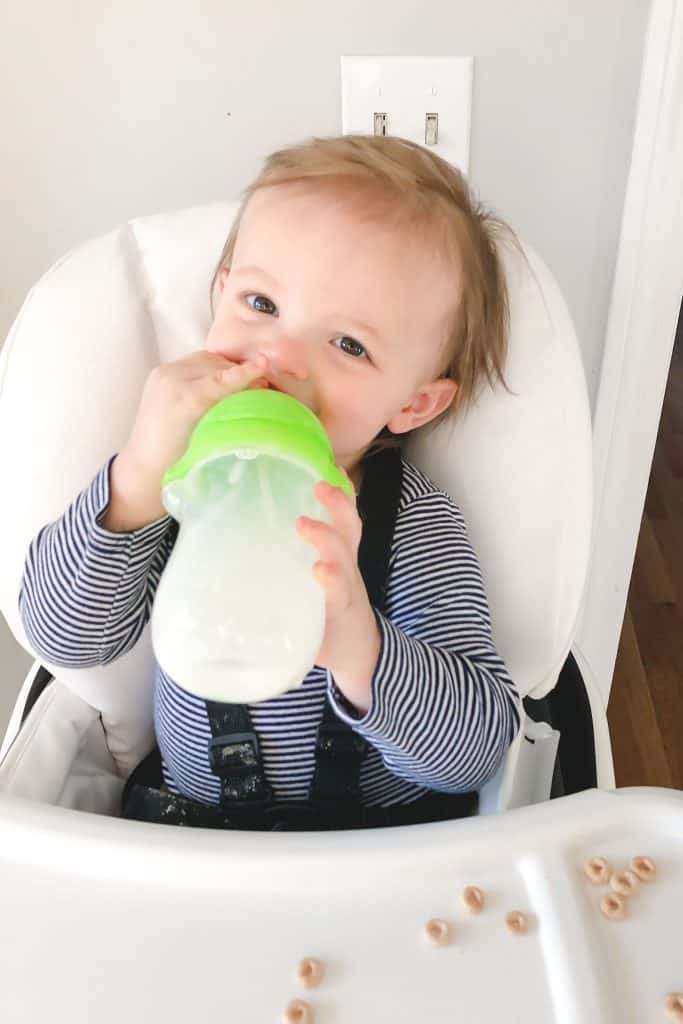 This post is sponsored by HP Hood. All opinions are my own.

Our first year of feeding James was a bit of a bumpy ride. First, I couldn’t produce enough milk so we switched to formula. Then, we had to find the right formula for him, which took a few tries. And the little guy would spit up so much after every meal that he basically wore a bib whenever he was awake. His doctor confirmed everything was fine; he just had to develop a stronger esophagus—which he did, after nine months. It’s worth mentioning that formula can be expensive, too. I say all of this to give you an idea of how much we were looking forward to the switch from formula to whole milk, which happens for most children at 12 months.

Sure enough, at James’ 12-month appointment his pediatrician told us that he was ready to make the transition.

Here’s what we learned:

When transitioning your baby to cow’s milk, it’s important to give him or her whole milk because that higher dietary fat content is beneficial for brain development (skim, 2%, and non-dairy alternatives like almond milk aren’t recommended). Whole milk also has plenty of protein for muscles and calcium and vitamin D to develop strong bones. Hood, the beloved dairy brand here in New England, believes that the milk we give to our little ones matters. That’s why they have high standards of quality and don’t add any artificial growth hormones or antibiotics. Hood milk provides nine essential nutrients per serving along with 8 grams of protein and the fat necessary for brain development.

Make the Transition as Gradual as You Want

Another way to make the switch is to completely swap out the formula for whole milk in one or two of your toddler’s daily bottles, eventually phasing out the formula bottles altogether. This is the approach we took, at the recommendation of our pediatrician, knowing that James doesn’t have any allergies. Thankfully James didn’t have any issues making the switch and seemed to love it right away.

Whole milk out of the fridge is cold, obviously, which might be a little jarring to your baby, who is used to warm or room temp formula or breast milk. Warming it up slightly (by placing the filled bottle in a bowl with warm water for a few minutes) helps to make it more like what they’ve grown accustomed to. Note, though: you don’t want to get into the routine of warming every bottle, so do this sparingly to avoid creating another habit you’ll have to later break. For us, warming the first and last bottles of the day seemed to be a soothing way to transition James.

Now our goal is to phase out the bottles completely, in favor of sippy cups, which seems to be going well so far but I’ll report back!

You can find Hood milk in your local dairy aisle. Or go to Hood.com to find out more information and find stores near you.