Why are cattle given hormones? Are cattle treated humanely? Answers to your biggest questions–so you can make decisions that are right for your family. 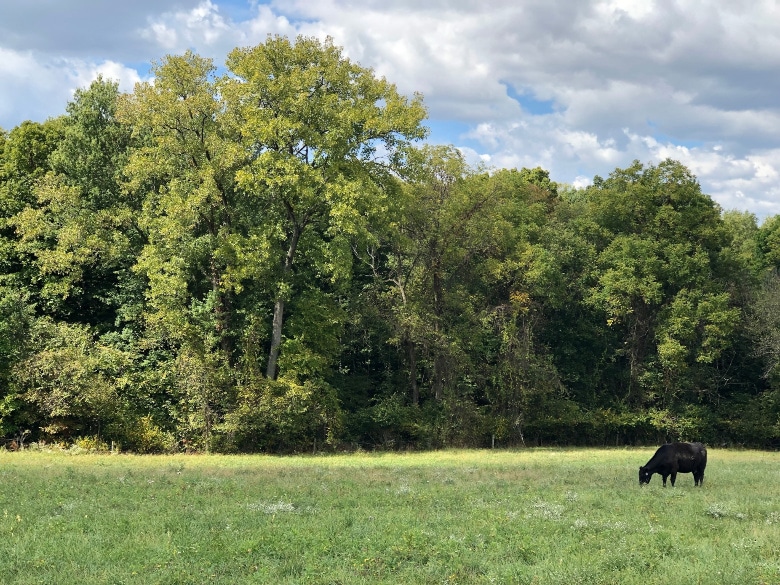 Thank you to the Ohio Beef Council for sponsoring this post. All opinions are my own.

As a dietitian who gives advice about feeding families, I’ve made it my goal to seek out first-hand experience and knowledge about where food comes from. I want to give you as much information as possible so you can make the decisions that feel right for your family.

So over the years, I’ve taken opportunities to visit all kinds of farms: organic and conventional farms, livestock and fruit farms, small family cattle farms and large hog operations. And I always try to keep an open mind and ask a lot of questions–including the hard ones.

Part of this work has been a partnership with the Ohio Beef Council, which represents 17,000 beef farming families here in Ohio on both conventional and organic farms. They’ve given me the chance to visit beef cattle farms around Ohio, as well as in Colorado, and talk to farmers in depth about cattle farming and beef production.

I’ve asked what YOU want to know about beef and beef production, then gone straight to the sources and done my own research to bring you answers. I hope this helps you feel more informed! 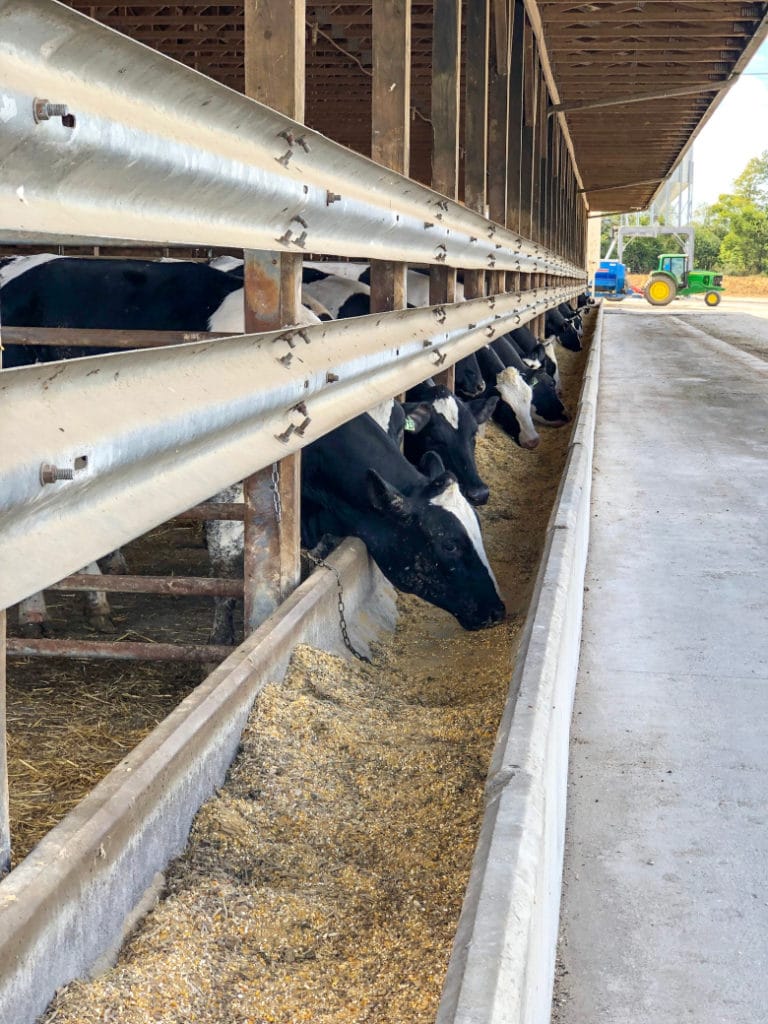 What’s the difference between organic and conventional cattle farming? Is there a difference in the beef?

Organic beef comes from cattle that have never received antibiotics or growth-promoting hormones. They may be either grass-finished or grain-finished (you have to check the label), but whatever they eat must be 100% organic, which means the food has been grown without the use of synthetic pesticides and fertilizers. If the organic beef is grain-finished, the cattle may have spent time in a feedyard (aka feedlot), but the grain they’re fed was organic. Organically raised cattle must also have access to the outdoors, shade, exercise areas, fresh air, and direct sunlight, according to the Agricultural Marketing Resource Center (for what it’s worth, conventional cattle were kept outdoors in sunlight in the very large feedyard I saw in Colorado).

Both organic and conventional beef have the same basic nutritional stats. They’re both great sources of protein, iron, zinc, vitamin B12, and other important B vitamins.

Keep in mind that if you see labels for “naturally raised” beef, it means the cattle haven’t been given antibiotics or hormones–but the feed was not organic unless specified on the label.

What is a factory farm? Why are cattle given antibiotics? Your questions answered!Click to Tweet

What is ground beef made from–and what’s added to it?

Ground beef is made from beef trim that’s cut from steaks and roasts during processing, and it cannot contain any water, phosphates, extenders, binders, preservatives, or coloring. According to the USDA, ground beef appears bright red on the outside because oxygen from the air reacts with pigments in the meat (the meat on the inside may look grayish-brown because oxygen doesn’t penetrate below the surface). 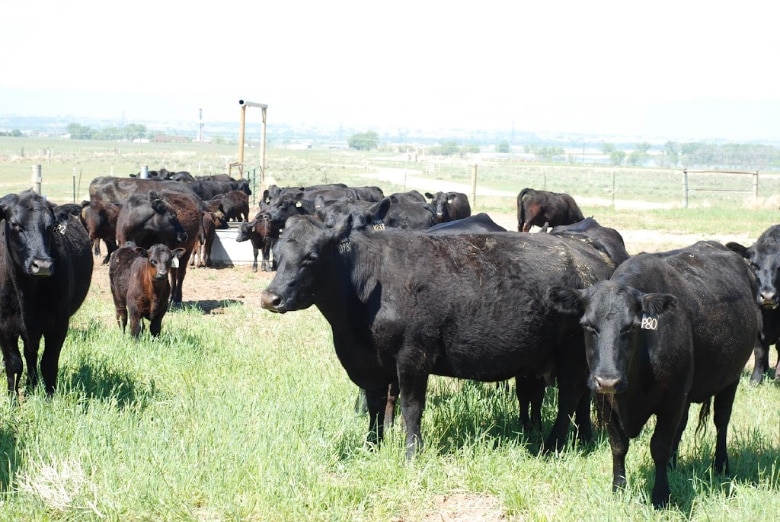 Cattle farming requires energy and water and does contribute to the production of greenhouse gas (gases that cause heat to be trapped in the atmosphere), thanks in large part to methane released when cows belch.

So if you want to cut back on eating meat to help the environment, that’s okay. But consider this as well: According to new research from the USDA’s Agricultural Research Service, beef production contributes just 3.3 percent of all U.S. greenhouse gas emissions (and U.S. beef producers are working all the time to be even more efficient). Agriculture in general contributes about 9 percent. Transportation and electricity generation together make up 56 percent of emissions. So eating less meat can reduce your personal carbon footprint, but using your car less–and reducing electricity use–will reduce it much more.

Some more things to consider: In the U.S., especially west of the Mississippi, many cattle graze on land that would otherwise be unusable, converting grass on that unusable land into protein (that’s called “upcycling”). The manure they produce goes onto crops like soy and corn as a natural fertilizer.

Cattle farming in the U.S. also supports a large number of family farms. In fact, 97% of beef farms are family owned and operated.

Why are hormones given to cattle?

Hormones are given to cattle to help them use the food they eat more efficiently to quickly put on more muscle (meat). That’s especially helpful for castrated male cows (aside from bulls used for mating, male cows are castrated on cattle farms because bulls are so aggressive) because castrating reduces the amount of natural hormones that help the cattle grow. Extra hormones help make up for that.

Keep in mind that you can buy beef with “no added hormones”, which means the cattle aren’t given supplemental hormones. But you can’t buy “hormone-free beef” (or “hormone-free” milk for that matter) because all animal foods contain natural hormones. Hormone levels aren’t significantly different in conventional and organic meat (or milk). But the choices are available. 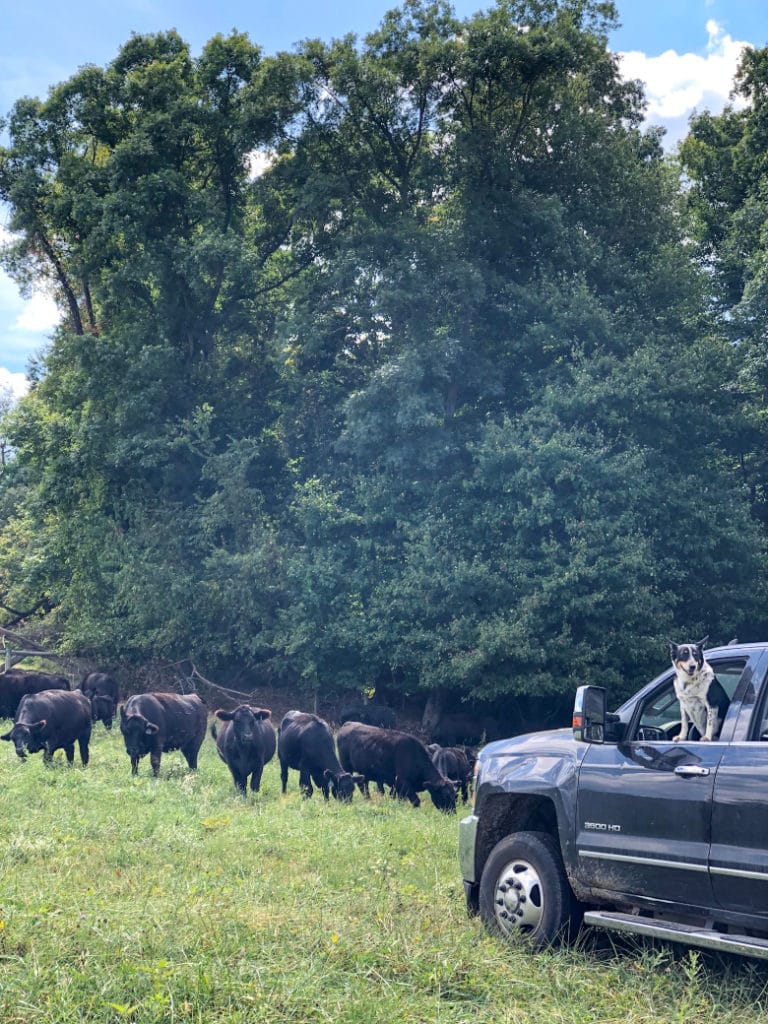 When and why do beef cattle get antibiotics?

Cattle on conventional farms receive antibiotics when they’re sick with illnesses like pneumonia. Antibiotics may also be added to feed to treat a larger group of cows that have been exposed to illness, or to help prevent it. All farmers must work with a veterinarian on any medication use.

When an antibiotic is used, the farmer can’t send that animal to harvest (aka slaughter) until the medicine has cleared from the body. Carcasses are randomly tested for antibiotic residue at processing facilities, and those that test positive are not allowed into the food supply. Farmers who send cattle with antibiotic residue can face steep fines from the USDA, so it’s not in their best interest to cheat the system.

Antibiotics are also used judiciously because they’re so expensive. During a farm visit here in Ohio, a farmer showed me a small bottle of the antibiotics they use to treat sick cows. The small bottle costs $1500, and his profit on each steer is just $100, so it doesn’t make financial sense to use more medication than needed.

There are bad apples in every industry. But most farmers truly care about their animals–if they didn’t, they wouldn’t be in the business. As one farmer told me: The cattle have to be cared for even if it’s Christmas, calves need to be birthed even if it’s 3am on a winter night, and farm families often don’t eat dinner until after their animals do.

There’s also a unique incentive to treat animals well: Cattle that are stressed won’t grow properly, and they’ll release hormones that affect the meat’s flavor–so it’s in farmers’ best interest to treat them well. Having cattle that are comfortable, well fed, and stress free is simply more economical for farmers. 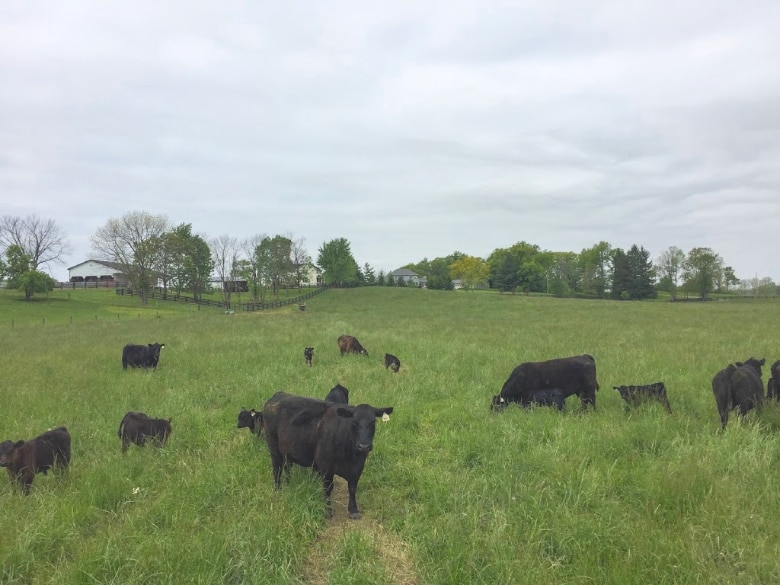 What’s the difference between grass-fed and regular beef?

It’s important to know that all cattle eat grass. For the first seven months of life, they graze on grass and spend a lot of time in pasture (all of the photos shown here of cattle in pasture were taken by me on conventional farms). It’s only when they’re transferred from the pasture to the feedlot that they’re fed a diet that’s higher in grain for the least 6-8 months of their lives. The feed is about 65-70 percent corn but still contains some hay and other forages.

If you’re looking for beef from cattle that have spent their entire lives eating only grass, you’ll want to look for 100% grass-fed beef, sometimes called “grass finished”. Those cattle must have access to pasture their entire lives and be only pasture- and forage-fed (with no grain).

Grass fed beef is often cited for being richer in healthy fats. It’s true that cattle raised only on grass do produce meat that’s higher in CLA (conjugated linoleic acid), a fat that’s been studied for possible heart health benefits. But keep in mind that CLA is largely found in fat, and many people trim that off. CLA is also found in the fat that’s marbled throughout the beef, but grass-fed beef tends to be leaner, with less marbling overall than conventional beef.

Another important point: The question of whether grass-fed beef is more sustainable is not clear-cut because it takes much more land and time to raise a completely grass-fed cow. For example, here in Ohio, each cow needs 1.5-2 acres of grass for grazing in the summer months. You might also like: What is Grass Fed Beef

Is there such a thing as “free-range” beef?

All beef graze on grass for the first several months of life. I’ve visited very small farms here in Ohio and very large farms in Colorado and in both places, young cattle roam in pasture, grazing on grass. But only “grass-finished” beef spend their whole lives eating grass and don’t go to feedyards (aka feedlots) to be fed grain. 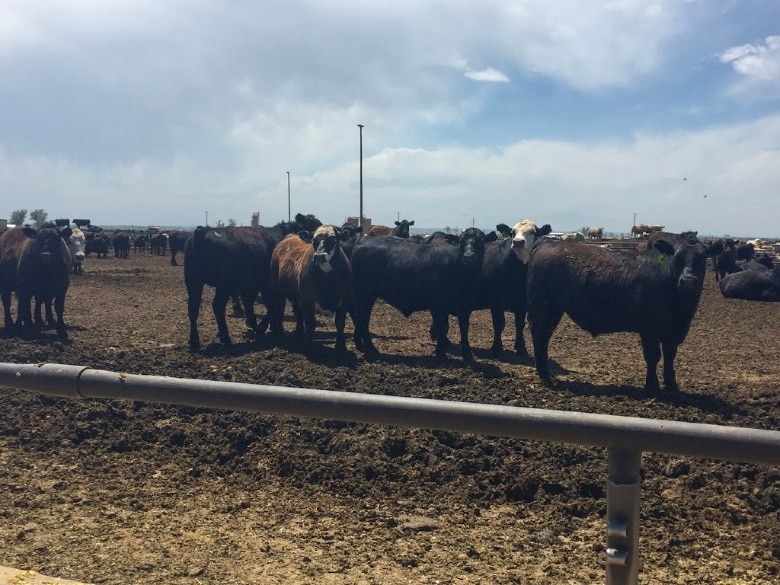 What is a “Factory Farm”?

Large farms, especially feedyards, are sometimes referred to as “factory farms”. It’s a term that rubs farmers the wrong way–I know, because I’ve asked! But as one farmer told me, it doesn’t matter if you have ten cattle or ten thousand, you still have to care for those animals and treat them well or you won’t be productive. And here’s something that might surprise you: Of the more than 700,000 cattle farms and ranches in the United States, the average herd size is just 40 cattle.

I visited what some might call a “factory farm” in Colorado, a feedlot that housed more than 30,000 cattle (I took the above photo there). Yes, it was startling to see that many cattle in one place. But it wasn’t a cold, corporate operation. It was still a family operation with workers in and out of the pens monitoring the cattle’s health and caring for the animals.

And the fact is, if you want to be able to walk into a grocery store and buy an affordable steak, large farms and feedyards with up to tens of thousands of cattle are a necessary fact of life. If you’d rather know your meat came from cattle on a smaller farm and you’re willing to pay more, you can buy beef at a farmer’s market or direct from the farmer. Bottom line is that it’s good to have choices. You might also like: All About Buying Beef In Bulk 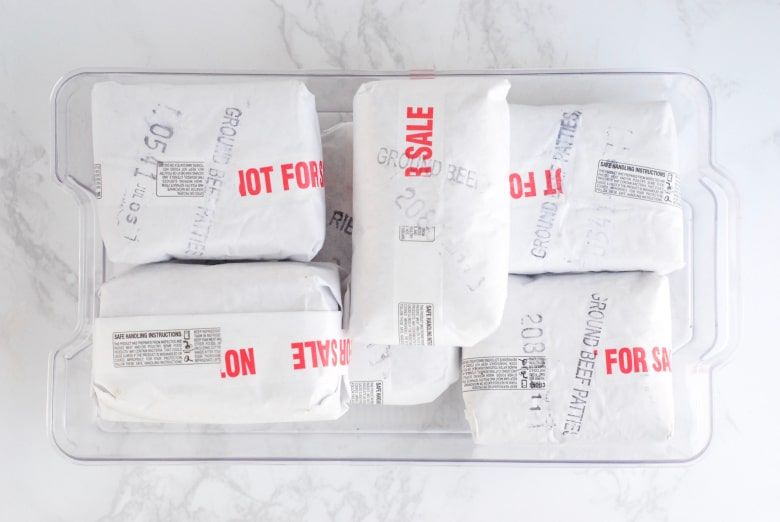 Is the fat in beef unhealthy for us?

Beef contributes only about ten percent or less of saturated fat (and total fat) to the American diet. And some of that saturated fat in beef is a type called stearic acid, which has been shown in some research to have a neutral effect on cholesterol levels.

But if you want to limit saturated fat overall, you can choose leaner cuts such as those with “loin” or “round” in the name. Some examples of lean cuts are:

Have more questions about beef and cattle farming? Let me know in the comments!