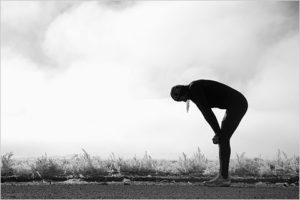 Why Fatigue is our best feedback

I was casually walking past the track, and as seems to happen, I can’t help but notice whoever is running around it. Some days it’s an older gentleman jogging around, others youthful kids experiencing the sport for the first time, but today there were three team sport players. How do I know they were team sport athletes, they had a GPS measuring system on their back. Two were watching and cheering as the other man started an interval. He took off quickly, so I assumed it would be a 200m or a 400m rep, yet he ended up lasting 800m. How he did it though, wasn’t too pretty.

After about 200m, his pace began to slow, at first gradually, but then rapidly as he passed 300m. Despite his friends best efforts in encouragement, “Come on Tom!”, no amount of motivation could spur Tom forward. As he went further into his 800m of inner hell, his posture changed and his mechanics deteriorated. Gone was the powerful stride he displayed in the first hundred meters; it had been replaced with a twisting-turning, over-reaching mess that seemed to be covering more side to side distance than propelling him forward. Every few strides he’d throw in a grimace and put his head down to will his way forward. From 600m onwards, every few strides it seemed like he would give up. His stride would chop and slow, but then he’d muster some fight onwards. By the end of the 800m, Tom was slogging. He was all over the place, going nowhere, and needed to be done about 400 meters ago.

It’s obvious that Tom has a pacing problem. But it’s also apparent that this type of scenario is relatively frequent in the world of conditioning. Athletes will frequently push until they deteriorate into the disheveled mess of running that our friend Tom displayed. Often in the name of “toughness” or conditioning.

I’m not against taking athletes to the brink, or even to failure. I have a fond place in my heart for “see God” workouts. But there is a distinct difference between going there occasionally while attempting to cue good mechanics, and going to the point of no return. After all, when we are in the depths of fatigue and slowing to a near jog, what are we doing except ingraining bad patterns? Do we want the mind and body to think “This is how we deal with fatigue and pain,” as our foot lags on the ground and our shoulders twist side to side?

The difference between team sport athletes and well-trained runners is that fatigue tends to manifest itself in different ways. The team sport athlete or young runner might have a complete and total breakdown. The runner who has spent years honing his response to fatigue might have a single tell–over striding, leaning back, or excessive arm movement– but by and large he holds things together well.

What does Fatigue tell us?

And that gets me to the point of Tom’s story: fatigue provides feedback. While we are often in search of the latest gadget to quantify workload, the true answer is often staring us in the face.

How we move and look provides more insight than the latest GPS data, physiological parameters, or proprietary stress load algorithm can. We all have a weak point in our movement chain that provides clues to how hard we are working. Some are rooted in the subconscious, while other reactions are deliberate.

Our job as a coach is to sit back and develop an eye for understanding each individual’s fatigue signature. Do they develop tension in their shoulders, face, or arms? Are they stoic, attempting to stay relaxed for as long as possible, before a subtle hint arises, betraying their true effort? Or are they someone who throws on a pain face at the first sign of fatigue, almost as if they are trying to convince others, and themselves, that they are working hard enough.

If you look close enough you can start to pick up the seemingly automatic reactions and the more deliberate ones. This data then can be utilized to understand how hard each athlete is working. In his book on training, Olympic Gold medalist Bob Schul assigns training efforts by the tension levels they create. The greater the effort, the more tension tries to creep into our mechanics. Schul and other coaches were on to something.

Is it exacting? No. But neither is any other metrics out there. The metrics might complement what we do and provide further insight. But for the vast majority of athletes, paying attention will provide all of the clues you need.

When watching workouts, I’m often asked how do you know how many hard intervals an athlete should do. Do we stop at 8, or 10, or maybe 15? Of course the physiology matters, but the reality is what we are doing is trying to get an athlete a particular stimulus. And to do that, we have to aim for a particular amount of fatigue. We need to know how far we should push an athlete on that day. Sometimes we might want to go for a big stimulus and go to the well, other times we might stay at a 7 or 8 out of 10.

When we write a workout, we are essentially predicting. How fast, how many reps, how much rest, and how far can the athlete go. Will they be able to handle 6x400s in 60sec before breaking down or can they make it to 10?

The athlete’s fatigue signature, then, acts as feedback. It provides clues to how close to the edge they are. What that means is that occasionally, you’ll stop an athlete before you had planned to if fatigue starts to make an appearance early.

Which brings us back to our team sport athlete Tom; what should he have done? Given that the last 400 meters of his 800m rep he was completely falling apart. What did he accomplish? He patterned horrible biomechanics, and more importantly, a negative coping experience. Instead, given the complete and utter breakdown of Tom’s form, he was probably better off cutting it short at 300m or 400m. Then finishing with some shorter reps, like 200s or 150s, where he could maintain some semblance of a quick pace, as well as a more natural running stride. Would he still have had to work hard? Absolutely. He likely still would have struggled, but given the shorter distances would likely be able to hold everything together just enough so that he can work on how he copes with fatigue, not succumbs completely to it.

Steve Magness is a coach to world-class runners, as well as the author of the new book, Peak Performance. He can be found on twitter @stevemagness