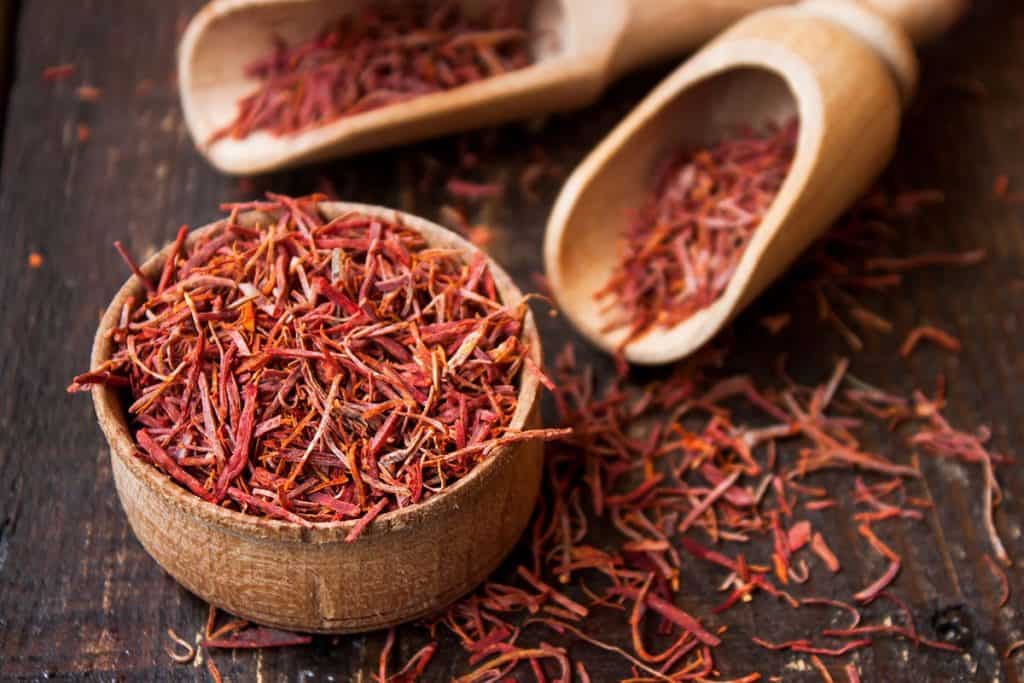 The health benefits of saffron have been known for centuries and it is one of my favorite herbs. It has various applications at both food and medicine in many cultures around the world. Saffron contains several beneficial compounds that can help improve overall well-being. These include carotenoids, flavonoids and crocetin which helps boost metabolism. In addition, saffron may be helpful with certain conditions such as arthritis or depression. Here’s what you need to know about this amazing herb.

How Does Saffron Work?

Crocins are powerful anti-inflammatory agents found naturally in saffron. Crocin works by inhibiting cyclooxygenase enzymes. COX enzymes play a role in inflammation and pain. This means that taking saffron could potentially reduce joint swelling and stiffness associated with rheumatoid arthritis. However, more research needs to be done before we can make any definitive conclusions on its effectiveness.

Our Pure Saffron Extract for Healthy Weight Loss is a quality weight loss product that has been trusted by thousands of customers worldwide.

This saffron supplement contains high-quality saffron that can help you manage your weight and other health issues, such as anxiety and depression.

Life Extension Optimized Saffron is the best pure saffron supplement out there thanks to its standardized dose, strong reputation, and purity of the saffron used in manufacturing.

While saffron’s benefits extend far beyond weight loss, Genius has harnessed the power of saffron along with the neurotransmitter precursor 5-HTP to modulate your brain’s appetite sensations.

This combination appears to be far more effective than saffron alone in battling hunger cravings during the day.

Bio Nutrition goes an extra step to make sure that their saffron extract (the usual 88.5 mg dose per capsule) is standardized to contain 0.3 mg of safranal, which is one of the ingredients though to be important in the biological effects of saffron.

While this is good to see, don’t make the mistake of thinking that saffron is the only important compound. Saffron, like many other plant-derived supplements, likely relies on the interplay between several different molecules in the plant material.

Mother Nutrient Saffron Extract makes a simple and straightforward saffron extract that’s got 88.5 mg of saffron extract in a vegan-friendly cellulose capsule. It has good manufacturing practice certification; the only downside is the inclusion of silica as an anti-caking agent.

It’s a solid choice, as it only uses rice flour as a binder and doesn’t have any other extraneous ingredients.

Re-Body specifically markets this saffron supplement to treat hunger and reduce appetite, but there isn’t anything special about this preparation that would make it any more effective at doing so than another saffron extract.

1 Body makes a saffron supplement that’s somewhat lower in the concentration of the active ingredients than its competitors.

Though it too contains 88.25 mg of saffron per capsule, it’s only standardized to a 0.1% saffron extract versus the 0.3% of many of the other saffron supplements out there.

Whether this is because of the extra ingredients included as binders and stabilizers or whether it is a quality control problem is hard to say, but users tend to have more success with other saffron supplements.

NutriNatures makes a saffron extract that has many supporters, but it lands low in the rankings because of a few key details.

First, the company is not explicit about how (or whether) their saffron extract is standardized, and second, they use a gelatin capsule instead of a cellulose capsule, which prevents this supplement from being an option for vegetarians and vegans.

Who should buy saffron?

Saffron is a spice made from the stigmas of crocus flowers. The best saffron comes from Iran, India, and Spain. Saffron has been used for centuries to flavor food, and is also used in medicine. In fact, research suggests that saffron may help fight cancer, diabetes, heart disease, depression, anxiety, Alzheimer’s, arthritis, high blood pressure, ulcers, and even acne.

How does saffron work?

The benefits of saffron come from two main compounds found within the plant itself: Crocin and safranal. These chemicals act differently depending upon what part of the body you want them to target. For example, crocin helps boost your immune system while safranal reduces inflammation. Both of these components have antioxidant properties, meaning that they protect cells against damage caused by free radicals. Free radicals cause cell damage, leading to diseases like cancer.

What types of saffron products exist?

There are three different ways to get saffron into your diet. You can eat it raw; cook with it; or take a dietary supplement containing it. Raw saffron is available online through sites such as Amazon and eBay. However, if you choose to purchase saffron directly from a store, look for brands that specify “100% pure” or “purest.” This means that the saffron was grown without pesticides or fertilizers. If possible, try buying saffron from a local farmer who grows his own crops rather than purchasing it from large companies.

You can also add saffron to foods during cooking. A common way to do this is to steep dried saffron threads in hot water before adding them to dishes.

Saffron has a wide range of health applications It can:

Saffron improves memory function by increasing the production of acetylcholine, which is responsible for learning, attention, and memory. Saffron also increases the levels of dopamine, serotonin, and norepinephrine, which are all involved in mood regulation.

One study showed that taking saffron daily reduced cortisol levels in people experiencing mild-to-moderate stress. Cortisol is one of the hormones released when we feel stressed out. When our bodies release too much cortisol, it causes us to experience symptoms associated with stress including fatigue, muscle tension, headaches, difficulty sleeping, and increased appetite. Reducing cortisol levels allows us to better manage stress throughout the day.

A recent review published in the journal Nutrition Reviews concluded that saffron could be beneficial for boosting immunity. One reason why might be due to its ability to increase the number of T helper lymphocytes, white blood cells that play a role in fighting infections. Another possibility is that saffron contains antioxidants called carotenoids, which reduce oxidative stress on the immune system. Oxidative stress occurs when there isn’t enough oxygen around to properly metabolize harmful substances produced by living organisms. Antioxidants neutralize those toxins so that they don’t harm healthy tissue.

In vitro studies show that saffron inhibits enzymes known as HMG CoA reductase, which break down cholesterol inside liver cells. As a result, less cholesterol gets converted to bile acids and excreted via urine. Less cholesterol circulating in the bloodstream lowers LDL cholesterol levels, allowing HDL cholesterol to rise.

They suggested that these effects occurred because saffron inhibited an enzyme called cyclooxygenase 2, which plays a key role in promoting inflammation. COX2 helps produce prostaglandins, chemicals that cause pain and swelling. Inflammation contributes to many types of cancers, particularly colorectal cancer.

The antidepressant properties of saffron have been studied extensively over the past few decades. Researchers believe that saffron works by stimulating certain brain receptors that help regulate moods. Studies conducted in India indicate that consuming saffron along with other herbs improved depressive symptoms among women diagnosed with premenstrual syndrome. PMS affects up to 70 percent of menstruating females worldwide. It causes physical and emotional changes including irritability, fatigue, bloating, breast tenderness, headaches, cramps and food cravings. Saffron has also proven effective against anxiety disorders such as panic attacks and obsessive-compulsive disorder.

One study showed that people who ate saffron daily experienced significant improvements in their short term memory after just one month. Other research suggests that saffron can boost working memory, or mental capacity needed to hold information temporarily while performing complex tasks. This effect was seen only in older adults, however. A separate trial involving young men demonstrated no improvement in cognitive function following consumption of saffron capsules. However, this particular study did not include any placebo groups, so we cannot rule out the possibility that participants simply got better without taking anything.

The most common side effect associated with taking saffron is nausea. Some people experience headaches after eating foods containing saffron. If you’re pregnant, nursing, under 18 years old, or take medications, talk to your doctor before using saffron products.

The most effective clinical research studies on using saffron for medicinal purposes have employed doses ranging from 15 to 40 mg per day. The recommended dosage varies depending on which product you buy. For example, a capsule may contain 10 milligrams of active ingredients, whereas an extract might be made with 100 mg of dried stamens. You should start low and work your way up until you find what feels right for you.

How long does it last?

Most saffron supplements will stay potent for several months if taken properly. But some manufacturers recommend refrigeration because they want to ensure freshness. Store them away from sunlight and heat sources since these factors degrade the potency of herbal remedies.

Where do I get it?

What else should I know?

If you decide to try saffron, make sure you follow directions carefully. Do not exceed the suggested serving size unless advised otherwise. In addition, avoid mixing different types of saffron together. They could interact negatively. And don’t forget to drink plenty of water throughout the day. Water helps flush toxins from your body and keeps you hydrated.